Valuing conservation in Australia - reflections on the bushfire crisis

By any measure, these fires have been catastrophic - loss of people's homes and treasured possessions, business completely destroyed, the trauma suffered by people (and the long-term impact of that trauma) and the impact of the fires on our native wildlife - plants and animals. However, we are privileged to witness examples of bravery, generosity and exemplary leadership.

The coming months will also see the usual attempts to cast blame, and see our political leaders leap at seemingly simple solutions to complex problems.

Australia is a unique place - we are a 'mega-diverse' country, one of only 17 to hold the title. Simply put, it means much of what we have in Australia cannot be found anywhere else.

Tens of millions of years ago, the Australian continent separated from Gondwanaland, allowing our flora and fauna to evolve completely independently through the mega-fauna period of giant wombats and kangaroos to where we are today - custodians of specifies found nowhere else on earth such as the platypus, the bilby and the iconic koala.

Unfortunately, not only are we a mega-diverse country, we also have the record for the worst mammal extinction rate on the planet. In the some 200 years since Europeans set foot in Australia, we have lost more than 30 mammal species.

This extinction rate is not slowing down, rather it is increasing. We now have about 50 mammal species at risk of extinction in the coming decade. Once they are gone they are gone forever, consigned to the history books.

In the last few years we have lost the Christmas Island pipistrelle - a tiny bat. The only way you can  hear its call is to download a recording of the last bat as it flies through the forest searching for its mate.

The problem even extends to Western Australia's very own faunal emblem - the numbat. Once numbering in the tens of thousands, it is estimated we now have less than 1000 of these endearing little animals. Fifty per cent of the remaining numbat population is protected by large-scale feral predator-proof fenced areas constructed by the Australian Wildlife Conservancy (AWC).

This extinction rate is driven solely by the influence of European arrival - Europeans introduced feral animals such as cats, foxes and rabbits to Australia and oversaw a radical change in fire management across the landscape through the elimination of indigenous practices and a completely misguided attempt to apply European land management practices. With many species already at risk,the fire season has pushed many to the precipice.

A catastrophe of this magnitude forces us to consider what it is we value about he unique nature of Australian wildlife. Why do we not value the bilby, numbat or even the koala as a precious symbol of Australia, yet the marsupial's population has reduced from an estimated 10 million pre-European arrival, to around 80,000 in highly-fragmented and exposed populations.

I have set myself a personal challenge. My personal mission in life is to create a sense of value in our distinct wildlife so people won't stand for anther of our unique species going extinct. Our school children will be educated about Australian animals over African animals and, perhaps controversially, companies will see investment opportunities within conservation providing financial returns, as well as generating outcomes to deliver more native wildlife such as numbats and bilbies.

The fires in south-east Australia are a wake-up call to the grim future many of our unique animals face.

This is my challenge to you as an Australian and as a reader of a leadership magazine - what is it you value about Australia? What is your part in helping to secure our future?

AWC is the largest private owner and manager of land management across more than 6.5 million hectares. AWC employs more than 220 staff, with over 80 per cent living and working in places such as the Kimberley, Cape York and Central Australia. 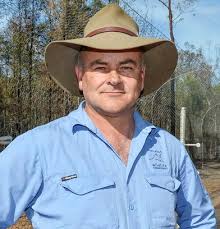 Tim, who joined AWC in 2011 as its National Operations Manager, has been acting in the role of CEO since July 2018.