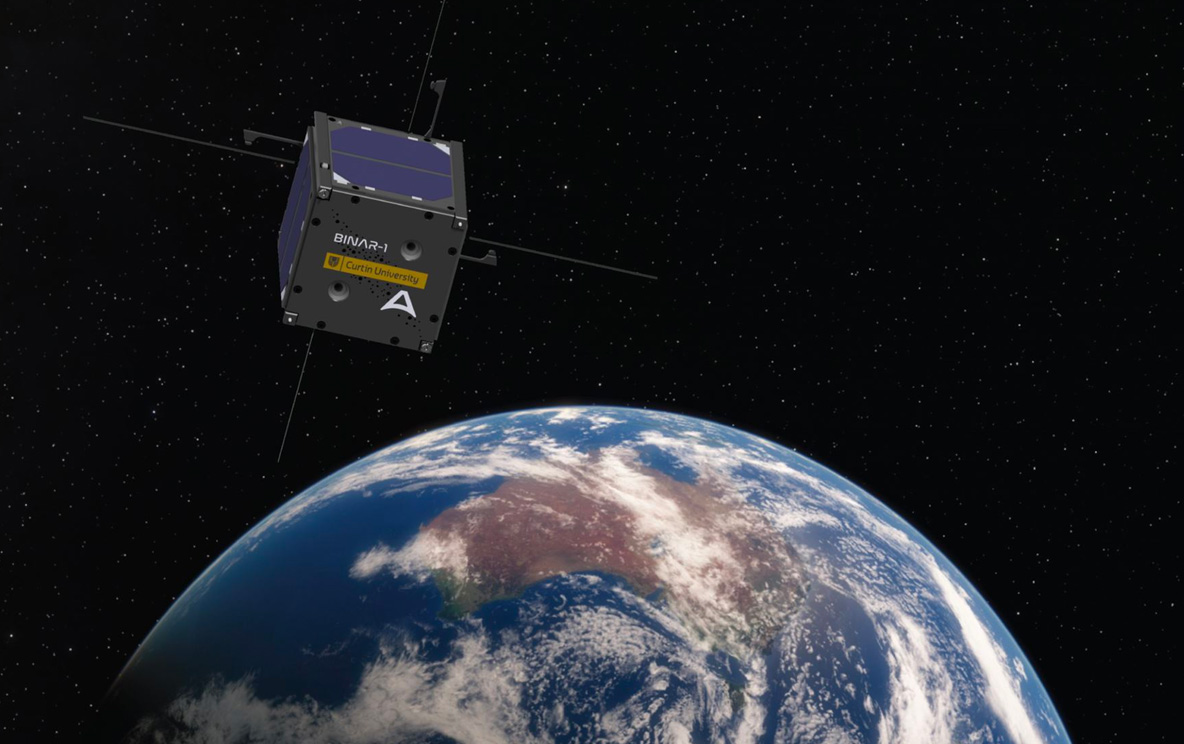 Once solely the domain of the world’s superpowers as they set about competing in increasingly ambitious nation building projects, the incomprehensibly vast field beyond our planet’s atmosphere is now emerging as the plaything of billionaire capitalists and a growing number of countries wanting a slice of the rich intergalactic pie.

It might be time for Western Australia to leverage its unique position to join them.

In 2018, ACIL Allen Consulting prepared a capability report into the space industry in WA for the Department of Jobs, Tourism, Science and Innovation.

The report found WA had many advantages and opportunities in the space sector – its location is ideal for space situational awareness and facilities that contribute to global coverage of space assets, including tracking of launches, and the state hosts capabilities in the development and use of space-derived applications.

There has been definite inroads into the sector, with a 2019 Memorandum of Understanding signed between WA and the Australian Space Agency based in South Australia for the advancement and growth of the industry sector, as well as the launch of the Australian Remote Operations for Space and Earth (AROSE) consortium in 2020 with Curtin University, Fugro, Nova Systems, The University of Western Australia (UWA), Woodside and the WA State Government.

PwC economic modelling estimates that in five years the remote operations opportunities derived through AROSE will improve WA's economy by $196 million annually and create 1540 jobs in the state.

This would complement the list of endeavours from universities in the sector, from Curtin’s partnership with Lockheed Martin for a space tracking system, to UWA’s International Space Centre working on high-speed and quantum-encrypted free-space optical communications.

Both Curtin and UWA are also collaborators involved with the Square Kilometre Array (SKA) Regional Centre project, towards which the Federal Government recently announced it would invest $64.4 million.

The funds are to be used  to establish a centre in Perth to process and analyse data from the SKA radio telescope.

A global collaboration of 16 countries, the SKA will be one of the world’s largest science facilities, exploring the entire history and evolution of the universe, and uncovering advances in fundamental physics.

WA isn’t unknown to the global space industry, having played key roles in NASA’s Mercury, Gemini and Apollo missions to the Moon from 1961 to 1972.

According to Curtin University Deputy Director for the Space Science and Technology Centre (SSTC) Renae Sayers, that heritage has continued through to the present day.

SSTC is the largest planetary science group in the Southern Hemisphere, but it’s a challenging environment in WA, with a lot of federal resources going to SA.

Ms Sayers said one aspect holding the WA’s industry back was the challenge of how to translate our strong heritage in basic and applied research in space and planetary sciences, and help grow a WA industry, against that funding environment.

“We’re trying to help grow a space sector but it’s a tough environment.”

“So there's a lot of work to be done, but there are a lot of wins to be had.

“Our goal is to generate the innovations that can flow through to WA industry; provide a spacecraft platform that our SMEs and startups can use to trial spacecraft systems in orbit, fly inspirational missions and train the future workforce.

We have our sights set on Western Australian students being able to build real things that go into space so that we build that heritage – that end-to-end experience – so that WA students can go into a thriving WA space sector and continue to build community and capability around this unique set of circumstances we find ourselves in.”

Ms Sayers is also involved in the Desert Fireball Network in partnership with NASA and the AROSE consortium, while the SSTC is home to the Binar Space Program, which is launching seven of its WA-designed-and-built small satellites in the next 18 months.

Known as CubeSats, these small but highly integrated and capable spacecraft offer cost-effective opportunities to test out technologies in orbit. This is critical to building up flight heritage for space innovations and allows students to have real hands-on experience. 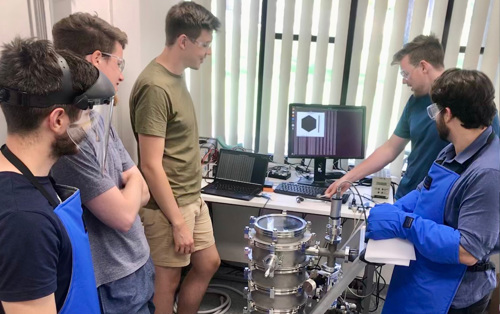 “Through AROSE, the Binar platform offers the bridge for terrestrial technologies to turn to space,” Ms Sayers said. “Whilst NASA funds can't flow directly into any country, its Moon to Mars mission provides opportunities to collaborate on a grand vision.

“It makes sense for our world-class technologies to be enabling and competitive in providing a very real contribution. And it's no secret NASA has tapped Australia on the shoulder, so to speak, around our remote operations and remote management capabilities – that epicentre is here in WA.”

Ms Sayers said she had noticed an increased appetite from investors in the sector in recent years as companies looked to the stars for new profit pipelines.

“I think this is why we're seeing a period with lots of different companies that have a lot of terrestrial capability, wanting to understand how they can pivot and take a big bite of this very delicious, very big international space sector pie,” she said.

“We see year after year through fiscal reports, economic impact studies and agency-wide evidence that you get significant return in investing in space science. That foundation feeds everything else. It’s the Silicon Valley model translated to space, where top research institutions help feed growth in the private sector.

“It takes people to do that investing, early adopters and a vision. In WA it could very well be that just one person writing one cheque completely changes the trajectory.”

Ms Sayers said Australia more widely was facing challenges in its funding environment for the science that supported progress in the space sector.

“It's not just funding cuts for research, it's about the mechanisms of how we actually go about getting a prosperous pipeline for the economy and society as a whole using space as the enabler,” she said.

“There’s a very strong pressure in universities around the country to commercialise research outcomes, to partner with industry and do demand-driven research, but basic research – research that underpins space exploration – is getting sidelined. That’s a shame, because in space that’s the inspirational component that attracts the brightest and best.

“Basic research generates new knowledge. Applied research uses existing knowledge to address foreseeable goals. Basic research isn’t being funded. You can get a little way without it, but not far. Other nations recognise that, which is why they fund it. The pathway to commercialisation needs both. Without basic research that process is being cut off at the knees.”

When announcing the Australian Space Agency, one goal outlined by Prime Minister Scott Morrison was to triple the size of the country’s space sector, adding $12 billion to the economy and creating up to 20,000 jobs.

“So what we're seeing here is a bit of a call to action of our Australian Space Agency,” Ms Sayers said. “They are keen to see jobs and growth and lift the economy and provide opportunities in Australian businesses booming around this. And yet, by what means are we hoping to achieve this?

“The funding model adopted by overseas agencies is informed by multiple econometric studies which show that funding science – particularly missions – yields a five to 10-times return on investment. The Australian Space Agency model is unique. Overseas agencies fund science not as an optional extra. They fund it because it generates jobs and growth.

“Space missions inspire like nothing else. In requiring new technologies that can operate in the harshest environments, and challenging the brightest and best with bold aspirational and inspirational goals, they accelerate capability development in advanced spacecraft systems with proven flight heritage.

“With scientists working closely with engineers, academia with the private sector, they organically enable translation of innovation from lab to industry. And they are a crucible for development of a highly trained world-class workforce of scientists and engineers that feed a domestic space sector.

“We have this competitive and comparable advantage in the sense of our geographical location, but how are we leveraging that?”

Ms Sayers said building opportunities at home was the place to start. “We want to fly a WA mission and help build a WA space industry,” she said.

“We want to make sure there is somewhere for these graduates to go that we are investing in. We need to give real opportunities and inspiration for students to develop their skills so we can meaningfully contribute in the space sector globally.

“We already see that we have complete mine sites being run out of Perth Airport and we have five different remote operation centres here in Perth. So the case is there, but the opportunity is still locked up in those sectors and locked up in particular companies.

“How do we cross over and transition those – those values and opportunities – and actually get inspiration for that next generation?”

Renae is Curtin University's Deputy Director for the Space Science and Technology Centre (SSTC). You can connect with Renae on LinkedIn

Workplaces of Tomorrow Australian business now and into the future

A glimpse into the moving parts shaping Australia's workplaces