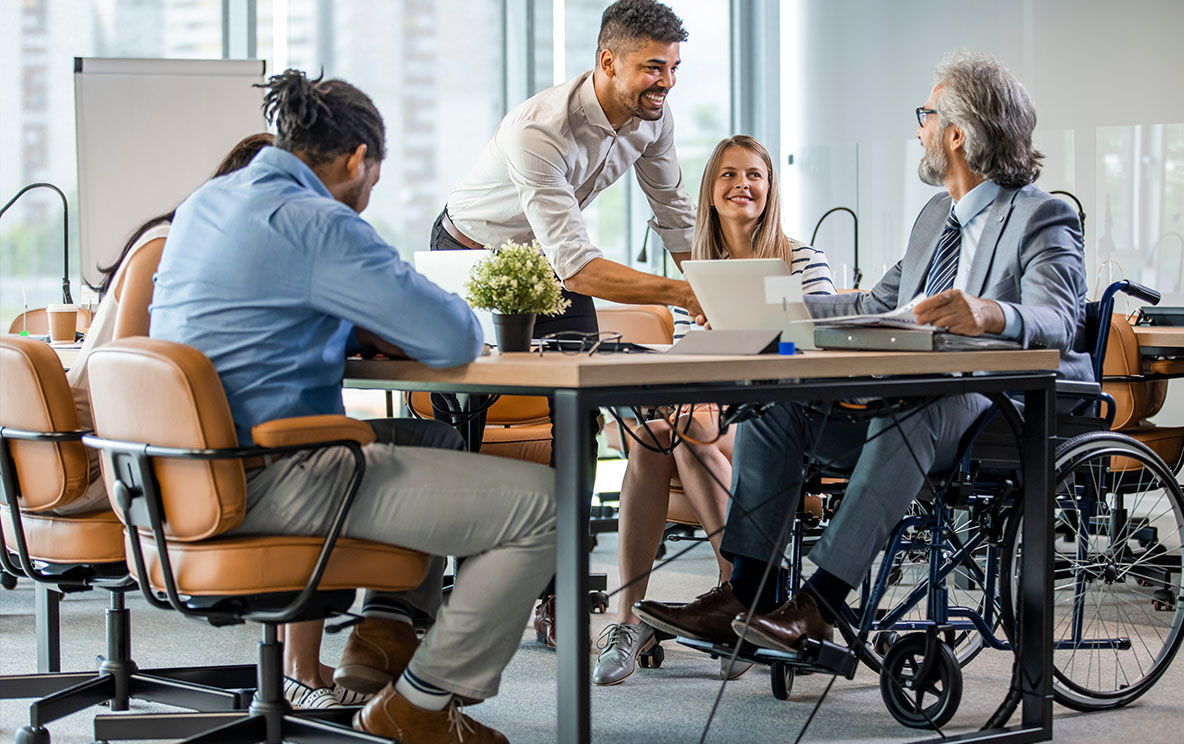 Disability inclusiveness in the workplace

Across the country, thousands of Australians with disability would be at work today if they were given the opportunity.

While there are a multitude of recognised benefits to hiring people with disability – from less sick days and occupational health and safety incidents, to increased productivity and greater diversity – they still have their cards stacked against them.

Edge Employment Solutions Chief Executive Officer Sally Hollins said this was a result of unconscious bias – preconceived ideas of what people could and couldn’t do because of a disability.

“Unconscious bias is one of the biggest barriers for getting into work,” she said.

“Employers think they can’t ask them to do certain things, but people with disability really just want to be treated like anyone else.

“It’s not what you can’t do, it’s what you can do – with a little bit of modificational change, you can be just as productive as someone without disability.”

Job satisfaction is something many of us take for granted, as working-age people with disability are twice as likely to be unemployed as those without disability.

“Employing someone with disability improves workplace culture, better engagement with the community and the opportunity to change someone’s life,” Ms Hollins said.

Diminishing unconscious bias in the workplace

Long-term meaningful employment can be difficult to find for those with disability.

For some jobs it doesn’t matter how much experience they have, being knocked back from potential work is common when they’re forced to tick the ‘I have a disability’ box on a job application.

Ms Hollins said there needed to be further education on unconscious bias in the workplace, as every disability was different – even within one particular disability, it can present differently.

“We offer a program called Mentoring Co-workers with Disability, it’s about getting everyone who works with that person to understand the disability and what they can do to help that person be productive in the job,” she said.

“Along with education surrounding unconscious bias, it’s important to get to know the wide range of candidates, learn what their strengths and special needs are and basically try and fill the gaps the best you can, whether that’s through the job, the work environment or educating workmates.

“That’s how you train for any inclusion, it’s about recognising the strengths.”

APM Western Australia Disability Employment Services State Manager Marina Chalmers said employers were often scared to hire someone with disability because they lacked understanding of what they could and couldn’t do.

“When employers are screening out people who are keen to work, want to work and have the ability to do the job, they’re really missing out on an untapped market.”

“A common scenario is being screened out because they haven’t had a job in the last six months," she said.

“Sometimes people with disability have to leave their job because they need treatment, surgeries or can’t physically continue their job, which can create a sudden career change.

“I think that openness to hiring someone or looking to have an interview with someone despite what’s on their resume is really important.”

Having helped a plethora of people with disability find work, Ms Chalmers said it was important to focus on an individual’s abilities, not just their disability.

“I was working with an employer who owns a cafe and I was finding some potential work for someone with a hearing impairment,” she said.

“The owner of the cafe said the person wouldn’t be able to work there because they couldn’t hear orders being called out.

“I said, ‘well why don’t you install a screen that shows the orders, that way everyone can see it without people having to yell – it will be more beneficial in the long run’.

“For us, it’s about having an employer that is open to hearing what we can do and how we can improve their business for everyone, not just those with disability.”

According to Edge Employment Solutions 2021 Research – Intent to Action, 21.7 per cent of people with disability had only disclosed their disability when directly asked by an employer or when circumstances forced them to do so.

“It’s important for workplaces to be solution focused, I think that would go further than anything else to make people feel welcome,” Ms Hollins said.

“It’s about not being afraid of the hard conversations – accept that everyone has strengths and weaknesses.”

According to Ms Chalmers, when employers hire new staff with disability it can often encourage others in the workplace to disclose their own disability too.

“Most of our clients have a non-visible disability – it could be mental health, it could be chronic pain and it could be something that isn’t visible,” she said.

“It’s likely that workplaces already have staff with disability, such as these mentioned, that haven’t actually been disclosed.

“It’s about being able to have open conversations and implementing disability awareness training.

“It’s the same processes they have in place for staff now, they still listen to their staff’s needs.”

A long way to go for inclusion

Inclusion in the workplace is much more than accessible pathways, wider car bays and ramp installations and, for Ms Chalmers and Ms Hollins, there’s still a long way to go.

“All organisations need to think about why they want inclusive work environments,” Ms Hollins said.

“It’s about being part of a community – people with disability make up about 20 per cent of your consumers.

“For that reason alone, it makes good business sense that you’re also employing them.”

About Sally Hollins
With an extensive background in a variety of roles, Sally is currently the Chief Executive Officer of Edge Employment Solutions. Since 1984, Edge has successfully secured thousands of jobs for Western Australians with intellectual, physical, vision, hearing, neurological and psychiatric disabilities. You can connect with Sally on LinkedIn

About Marina Chalmers
Having built a career in various mental health support roles, Marina is currently the APM WA Disability Employment Services State Manager. APM is a global human services provider that helps job seekers overcome barriers to employment and find a happier, healthier and rewarding life through meaningful employment. You can connect with Marina on LinkedIn

Human Resources Employer satisfaction with university graduates is on the rise