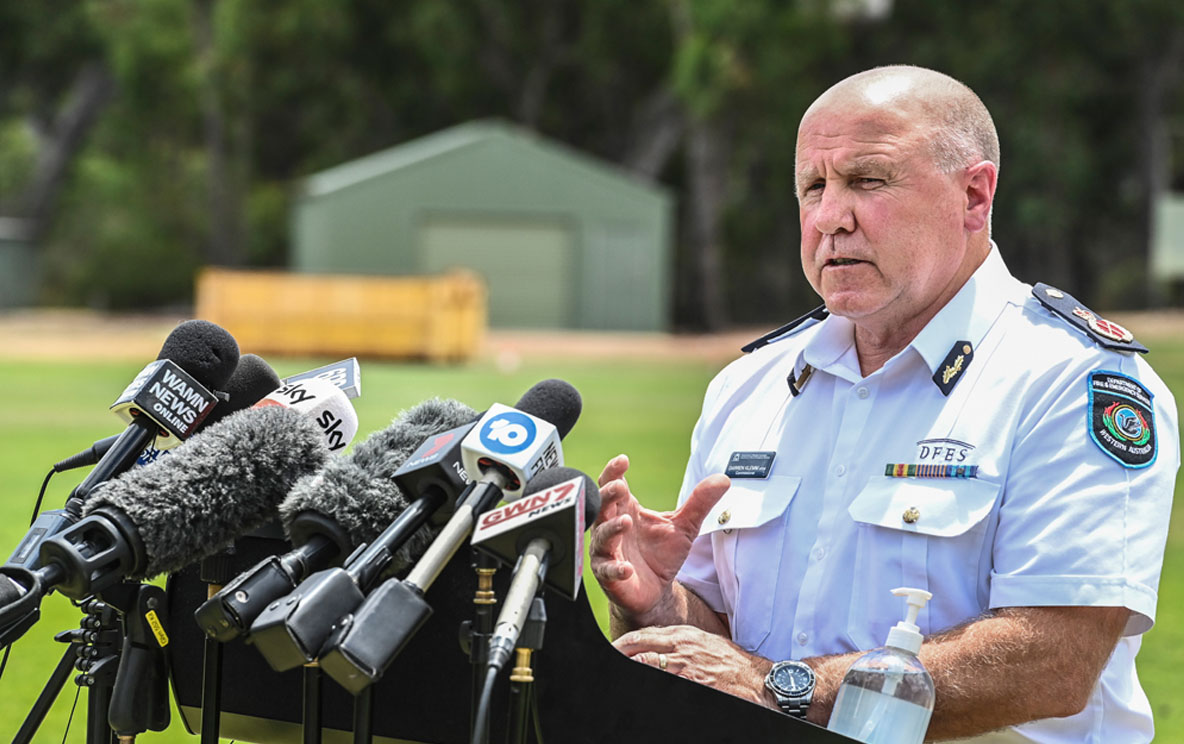 The keys to authentic leadership

When a fire breaks out in Western Australian bushland, it is the Department of Fire and Emergency Services (DFES) Commissioner Darren Klemm who mobilises the career and volunteer firefighters.

It is a position that requires a cool head, strategy and empathy.

Mr Klemm, a 1987 West Australian Football League premiership star for Claremont, has been involved in the fire and emergency services for more than 30 years, spending three years with the South Australian Metropolitan Fire Service before joining the WA Fire Brigades Board in 1993.

Key achievements during Commissioner Klemm’s time at the top have included effectively revamping DFES by establishing a Rural Fire Division to decentralise and enhance bushfire management, as well as being the driving force behind record-breaking mitigation spending, strengthened partnerships with volunteers and stakeholders and increased inter-agency cooperation.

In 2017 he was invited by the State Government to be a member of the inaugural Public Sector Leadership Council to drive reform across the public sector and was named the DFES Male Champion of Change in the same year.

With all these roles and responsibilities, you might wonder how Commissioner Klemm has time for a personal life.

“There’s not too much time outside of my role for me to go and do other things,” he told the audience at an AIM WA Inspirational Leader Series event.

“I said to my recently appointed Deputy Commissioner Craig Waters when I interviewed him for the job, that this is a lifestyle. It does consume you and there is plenty of after-hours work that is very difficult to escape from."

DFES is a big, unwieldy beast that is made up of a whole group of different people. It is those groups of people, from career firefighters and volunteers to members of the public and government, that are at the heart of all that DFES does, according to the Commissioner.

“I have made very, very clear with my people what DFES does and yes, we deal with fires, we deal with floods and cyclones and all the other things, and they are important groups and things that we provide in service to the community in WA,” he said.

"But ultimately, we're in the business of people."

"People should be at the forefront of every decision we make."

"If you put yourself in a position where every decision you make is such that the first thing that comes into your mind is people, how can you possibly make the wrong decision?

“You have to be a reasonable person yourself – you can't be malicious."

“So we're in the people business, and people that are in my organisation who can't understand that – can’t put people at the very forefront of what we do – then I can’t put this any simpler, there are opportunities elsewhere.”

For Commissioner Klemm, this commitment to people isn’t just about the people DFES serves, but the people who make up the workforce – workers and volunteers alike.

The Commissioner noted DFES had issues with bullying and harassment in the past and this culminated in a closed door meeting with all his senior staff.

“We had a session in 2018 which was at my request, where we shut the doors and put all people in the boardroom, all the senior people, and gave the opportunity to ask those questions that they never wanted to ask because they were worried about offending someone,” Commissioner Klemm said.

“So I do encourage that, if you feel there are those sorts of problems in your organisation, sometimes the closed door meetings that can be had without fear or failure are actually a critical part of moving forward to something.”

It is also about treating the people in your staff with respect and listening to their thoughts and opinions.

“If you're actually genuine and sincere in having mutual respect for people, then people I believe will see you as being authentic – it takes care of itself,” Commissioner Klemm said.

“Don’t pretend to have all the answers, you don’t. I certainly don’t and I have great people around me to check and make sure we are as right as we possibly can be.

“As a leader, you can’t have 15 of the same person in the room, as you will get the same answer. People have got to celebrate those differences.”

Being seen as authentic is an important mantra for Commissioner Klemm, who was tested very early into his tenure in this regard.

“When I was first appointed, I walked out of Parliament House with the minister and straight into a TV interview,” he said. “First question I got, ‘are you going to resign from the union?’. The answer to that was ‘yes’, and I did the next day. It was important I was not playing favourites.

“So you do all those things, then you gain respect. Respect flows, in my view, from being authentic.”

The next step to successful leadership is swallowing your pride, being humble and allowing the people in your employ to be at the front, according to Commissioner Klemm.

“Humility is neither having pride nor indulging in self-deprecation,” he said. “Don't think more of yourself than of others. I think many people would probably expect me to think that I'm a bit more important than most other people because I'm Commissioner, but it is just not the way I roll.

“My preference is to be behind the scenes in peacetime, and in war time, I’ll be at the front. It is important that you are allowed to stand behind the scenes as a leader to give the people who are coming next the opportunity to stand in front.”

Commissioner Klemm said his time playing footy helped to develop his admiration for teamwork, especially apt in an organisation like DFES.

“I come from a history of team-based sports,” he said. “I see a great value in it. No-one in DFES can deliver the service to the community on their own, it takes a team. Everything we do centres around the team. If you are not prepared to do that you are not the person we want.

“As a leader you have to care about what the team is going to achieve. You can't just be the leader of the team and set them off on a task and then not check back. You can’t separate yourself from it, and achieving something as a part of a team is fantastic.”

Commissioner Klemm said integral to teamwork was trust. “People will trust you if you're prepared to share your strengths and weaknesses,” he said.

“People shouldn’t think just because I am the Commissioner that I don’t have any weaknesses, I do, and I’m happy to share those. It is okay to not be good at something.

“That’s why you have good people around you.”

Lastly, Commissioner Klemm said humility was underutilised, with how to be more humble one of the most important lessons he had learnt as Commissioner.

“I could be sitting with the Premier one day and in Bull Creek the next talking to three volunteers in a smashed up shed,” he said.

With over 30 years' experience and knowledge in Emergency Management, Darren is an accredited Level 3 Incident Controller in WA, and one of only 38 certified Incident Controllers in Australia and New Zealand. You can connect with Commissioner Darren Klemm on LinkedIn

This non-accredited professional development course is delivered virtually over just five weeks. This particular course is designed specifically to meet the needs of public sector organisations and provides a snapshot of key Master of Business Administration learnings.

Leading Others Beware the hubris hazard

Know any of these?

Leading Others Get your hands dirty

It sends a clear message