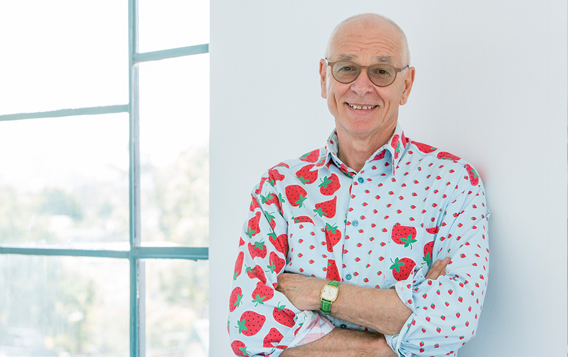 With the growing threat of climate change knocking on our door, the world has increasingly looked to its leaders to do what is necessary to mitigate its impacts.

As with other global crises that have preceded it, however, this inferred responsibility has not remained isolated to the governments that be.

In fact, when you consider one world power’s making, breaking and making again of the Paris Climate Accord in recent years, it is apparent many governments have struggled to reach a consensus on what, if anything, must be done.

Responsibility has additionally fallen to leaders within the business sector, who have begun to factor the limiting of carbon emissions into their long-term strategies.

Reasons for doing so include maintaining their brand and social licence to operate, though some might argue they have a compulsion to simply do their bit.

It’s taken us a while to get here.

According to renowned science communicator and author Doctor Karl Kruszelnicki – better known as Dr Karl – the dangers and costs of global warming and the greenhouse effect were recognised in 1973 by a large insurance company.

“Later in 1977, the fossil fuel companies agreed that global warming was actually happening, but reversed their position in the early 90s,” he said.

Fast forward to present day, and the effects of global warming have become quite evident to the average person, with more intense weather events, rising sea levels and record-breaking temperature extremes occurring around the world.

And, that’s just what we can see. Dr Karl told us:

“A lot of people don’t realise that we have actually tilted the Earth off its axis."

“Think of a spinning wheel or bicycle wheel, it’s spinning in perfect harmony. Then you shove a little bit of weight and it begins to wobble.

“Shifting a trillion tonnes of water from somewhere to somewhere else, in the sense that we’re melting ice which turns into a liquid and shifts location, has caused the Earth to wobble.”

For many of us who struggle to fit work and life commitments into waking hours, the prospect of doing our bit to combat climate change can be somewhat overwhelming but, as Dr Karl points out, even our ability to find enough hours in the day is being impacted.

“We've actually made the day shorter,” he said. “You wouldn't notice it without a survey-accurate clock, but the Earth completes a complete 360-degree rotation roughly once every 23 hours, 56 minutes,” he said.

Dr Karl said the cause of this phenomenon could be likened to an ice skater spinning on a lake with their arms out. As they bring their arms closer to the centre of their body, or water melts and moves into the oceans, they speed up.

According to Tom Quinn, Head of Policy and Research at business think tank Beyond Zero Emissions, with global change happening on such a grand scale, it’s only logical that seismic shifts would be occurring in the business environment.

These commitments, generally aimed at limiting emissions, have become commonplace.

“For businesses, it’s very much relating to day-to-day operations and how reductions can be made to ensure existing customers are satisfied,” Mr Quinn said.

“In Australia there has been a major focus on director duties and responsibilities regarding climate change. Directors and executives know that understanding their company’s carbon and climate exposure is now core business.

"The ability to assess and identify current risks means exposure can be mitigated and increasingly provide a competitive advantage that companies can seize to retain and grow their customer base.

“A zero-carbon future is happening, partly driven by government, partly by investors and consumers, so it just makes sense for any forward-thinking company that wants to preserve its market share to set a zero-carbon target themselves so they can start the transition, realise the upsides and mitigate the downsides.”

Regarding smaller-scale change, Dr Karl said there were many measures businesses and individuals could adopt to lessen their carbon impact.

“There is a great number of things people can do, both individually or as a business,” he said. “On the individual level this could include putting some solar panels on your roof to harvest sunlight energy and store it in batteries, reducing the number of household internal combustion engine vehicles, or even washing your clothes with cold water and air drying.

“For larger bodies, you could look at shifting to a more economical vehicle fleet or an electrical fleet.”

For this to happen at scale, however, Dr Karl said government needed to consider matching the efforts of nations abroad.

“We as a nation are currently ranked last in our response to climate change, so more action is needed by our Federal Government to combat this."

“The Western Green Energy Hub was recently announced for the south coast of WA, which was a step in the right direction and promises a more ambitious strategy.

“But the government also needs to provide further incentives for people who are purchasing electric vehicles, because we are currently one of the only countries in the world that actually taxes and charges people to drive their electric vehicles whilst offering no rebate or incentive on the price.”

Incentives, according to Dr Karl, could include free registration or driving privileges for owners of electric vehicles.

From a power generation perspective, Mr Quinn said many larger corporations were investing heavily in renewable technologies, with the Western Green Energy Hub, led by an international consortium of energy companies, a prominent example.

“The recently announced Western Green Energy Hub is a $100 billion dollar facility targeting 50 gigawatts of renewables,” he said. “At the moment WA has 1.6 gigawatts of coal-powered facilities, so this is more than 30 times more capacity than existing coal capacity – and this is just one project.

“On top of that there’s the Asian Renewable Energy Hub project and Fortescue’s very ambitious renewable energy plans in the Pilbara.

"There is an absolute gold rush for renewable energy and zero carbon in WA at the moment, and it would be wise if we get our policy settings right to support that growth, because then we can seize the international market share that will underpin our prosperity for decades to come.”

Mr Quinn said energy-intensive industries like the mining sector were keen not to be left behind.

“On a remote mine site, it is much better to have onsite renewables and storage powering operations as much as possible compared to trucking in expensive diesel every few days,” he said.

“We are also seeing it inside the mines themselves – we are witnessing a rapid electrification of the mining vehicle sector.

“Underground, electric vehicles are superior for a number of reasons. First, they are safer because there are no fumes and emissions in enclosed spaces, meaning you’ve got a much safer working environment.

"On top of that it reduces costs through lower maintenance and fuel costs, and by removing diesel engines belching out fumes from the equation you can drastically lower ventilation costs.”

Switching to an electrified network also means these remote sites can operate in isolation for far greater periods of time, according to Mr Quinn.

He said the first goal of any business’s effort to limit carbon emissions should be a shift to electrify operations and procure 100 per cent renewable energy, a process which should involve a thorough examination of supply chains.

“The first step is to put clear emissions targets in your business strategy,” he said. “Doing this effectively means gaining a deep understanding of the current carbon and climate exposure of your company and your supply chains.

“Working with your supply chains is key, because if they can understand where you are going, they can lean in the same direction.

“You have to understand the supply chain so you understand where your vulnerabilities and strengths are. After that you can double down on your strengths and make them a competitive advantage, mitigate risks and set forward a plan to either decarbonise or reduce your climate exposure going forward.

“Once you have that, you can work with the supply chain, investors, and consumers and basically demonstrate what you're doing, and that will build confidence and set your company up for a future.”

Dr Karl is an science communicator and well-known author, with a media career spanning radio, TV, books, newspapers, professional speaking podcasts and more. You can connect with Dr Karl online

Tom is Head of Policy and Research at Beyond Zero Emissions, a not-for-profit research and education organisation known for its work designing and implementing a zero emissions economy for Australia. You can connect with Tom on LinkedIn

A brief guide to smooth flying

Going green at the office

Reflections on a bushfire crisis

A brief guide to smooth flying

Etiquette and other tips to avoid air turbulence