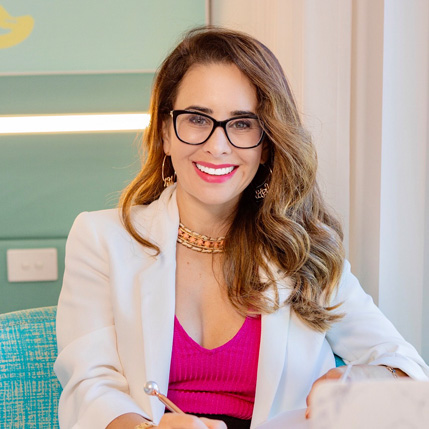 When the late artist Bob Ross hosted the painting tutorial television program The Joy of Painting, he would often make errors in his work.

This was no reflection on Mr Ross the artist. The show required him to paint a landscape and talk through it in 26 minutes, a task which meant mistakes were bound to happen – a smudge here, a drop of colour there.

It was how Mr Ross handled these blemishes which would come to be one of his defining traits. With no time to start over or throw in the towel, he would paint over his mistakes and turn them into birds.

According to Perth-based confidence mentor, speaker and author Dr Katherine Iscoe, there is plenty to learn from Mr Ross’ approach to painting in everyday life – it could even reflect one of the keys to unlocking self-confidence.

Dr Iscoe’s expertise in confidence is in part a product of a challenging upbringing and early adulthood, from moving countries to a loving but broken home and experiences with bullying and eating disorders, to failed businesses and relationships and a fluctuating loss of purpose, which would eventually manifest in a reliance on vices such as drugs and alcohol.

There were many moments of brilliance too. From achieving the highest grade point average at a boarding school and being made executive pastry chef at one of Canada’s highest profile restaurants at the age of 18, to offers of Harvard scholarships and the ultimate receipt of a doctorate, Dr Iscoe's path has been less than conventional.

Today her focus is on confidence and where people can find it. Contrary to the opinion of some, Dr Iscoe doesn’t believe confidence could be faked.

“Confidence is that secret ingredient which turns thoughts into actions.”

Dr Iscoe said mending self-confidence came down to more than just surface-level treatment. In her own experience, it was about embracing what she described as “paralysing and crippling shame”.

“Shame corrodes the very part of you which believes you are capable of change,” she said.

“Shame is the inner bully saying ‘you’re never going to be different, you’ll always be the same. No one is ever going to love you.

“You can’t fix your mindset with the mindset you have at the bottom of the spiral. As great an actor as you think you might be, you’ll always display fake confidence if you don’t deal with your shame.”

Cognitive behavioural psychology deals with this concept, shaped around thoughts driving feelings and experiences, and therefore influencing actions and behaviours.

Release what is holding you back

According to Dr Iscoe, the key to finding confidence is in releasing the secrets which are holding you back. And to free your thoughts and allow yourself to properly move on.

“If you look at multiple MRI studies that look at people who engage in talk therapy and sharing with others, the studies show higher neural activity within the prefrontal cortex – the ‘Yoda’ of the brain, which makes moral decisions and solves problems – and less activity in the limbic core centre, which is the emotional part. Think of a toddler flying off at everyone and only worried about its survival,” she said.

“Let’s put that together. If your prefrontal cortex is guiding your decisions, rather than your emotional core, then you’re going to feel better about yourself.

“Your actions are going to be healthier because you’re seeing things from multiple perspectives. The more you practice positivity, the better your life is going to be and the more confident you’re going to be.”

To find the release, Dr Iscoe recommended talking to a professional counsellor, psychologist, or someone trusted. In moments of doubt she advised channelling the wisdom of Bob Ross.

“We all make mistakes and we’re all in the middle of painting our life story,” she said.

“Are you going to let shame dictate how you finish your painting? Or is it time to look at your secrets and say ‘you know what? That’s done. I can’t do anything about it’.

“Learn from it, turn it into a bird, and enjoy the rest of your life with kick-ass confidence.”

Katherine is a Canadian-born confidence guru (and self-proclaimed shoe addict) who thrives on teaching effective, evidence-based solutions to help people stand out with confidence without feeling conceited. You can connect with Katherine on LinkedIn

Career Development How to ask for a pay rise