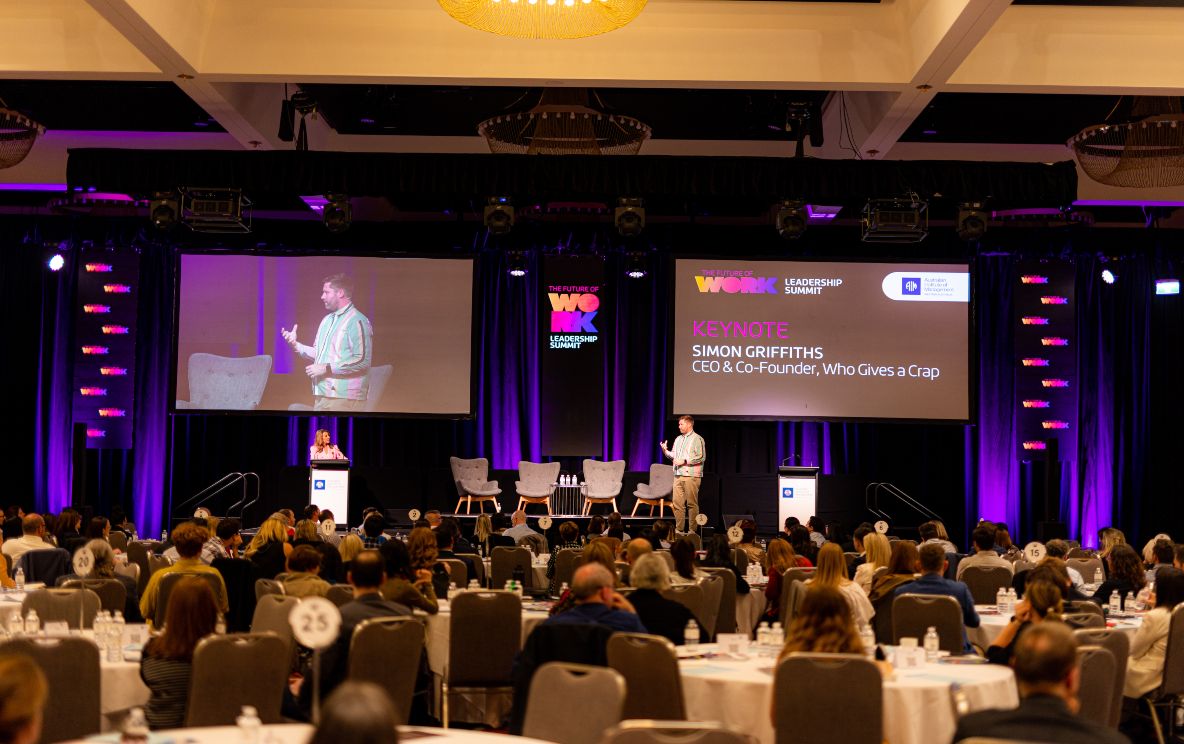 Who Gives a Crap CEO and Co-Founder Simon Griffiths

Bringing together prominent leaders and business thinkers from across Australia, the AIM WA Leadership Summit held on October 13 2022 at Crown Perth delved into the 'Future of Work' on both a national and state level.

Here are five critical insights from the day-long event.

1. A wider spectrum of generations

McCrindle Research Principal Mark McCrindle kicked the event off, saying recently published data from the Australian Bureau of Statistics’ 2021 Census showed both an increase of overall population and a greater percentage of older Australians.

PwC Partner Elizabeth Shaw said businesses could tap into the older demographic and entice them to stay in the workforce longer.

“Bunnings are a really good example of this, more than a third of its workforce is actually over the age of 50 – they quite regularly on-board new employees in their 70s,” she said.

“They have tapped into this idea that as people might leave one job and start to phase down towards retirement, they’re not ready to exit the workplace.”

While organisations across the country look at ways to keep older Australians in the workforce, Mr McCrindle highlighted the shift towards a new, dominant generation.

“In 2016, and for the five decades prior to that, it was the baby boomers who were the largest cohort,” he said.

“Then the 2021 Census came around and the largest population today is now Generation Y, also known as the millennials or the baby boomers’ children.”

A shift towards more fulfilling purpose in roles is also another emerging trend, with less emphasis now on pay, as well as more fluid career paths.

Mr McCrindle said balancing the trends and needs of emerging generations and bridging this across all cohorts within the workforce was key to success.

While the older and younger generations grow in prevalence in the workforce, so is the diversity of both women and employees from different cultural backgrounds.

Mr McCrindle said the 2021 Census showed Western Australians of ethnic backgrounds now made up the majority of the state’s population.

“Thirty-one percent of all WA residents are born overseas and 55.6 per cent of Western Australians have one parent who was born overseas – more than half the population,” he said.

“Those who have both parents born here are now in the minority in WA.”

Ms Shaw said the workplace was also more gender and culturally diverse than ever before, but there was still a lot more to be done to address barriers in participation and representation in the workforce and in leadership roles.

“Organisations often focus on building capability of underrepresented groups through initiatives, assuming that the reasons we don’t see more people from diverse backgrounds in leadership roles is because those people lack capability, rather than addressing some of the social, cultural and structural factors that might be holding back diverse groups,” she said.

Ms Shaw said some of the cultural biases of how leaders were perceived also needed to be addressed, highlighting the overrepresentation of men who are 190cm tall leading organisations, while only three per cent of ASX200 Chief Executive Officers are women.

3. No going back from hybrid working, but the office is still important

With remote working and schooling being such a normal part of the lives of the younger generations, Mr McCrindle said this form of work and study was now embedded into the DNA of future generations, however the social aspect of the office had just as many benefits for them.

For the younger employees who house share or live with their family, he said an exclusively remote working model could be a detriment, excluding them from a point in their career where face-to-face networking is so important.

Committee for Perth Chief Executive Officer Marion Fulker AM said while the Perth CBD had seen a significant decrease in people due to more remote working and empty offices, there were plans in place by the City of Perth to grow the CBD’s population to 90,000 residents.

Ms Fulker said to achieve this, there needed to be infrastructure in place such as a primary school and large supermarkets.

Who Gives a Crap Chief Executive Officer and Co-Founder Simon Griffiths gave an insight to how consumer behaviour had shifted towards sustainability.

Who Gives a Crap is an online toilet paper business with a difference – donating 50 per cent of the profits to build toilets in the developing world.

While a global toilet paper shortage suffocated supermarkets, it contributed to the company’s rapid growth, with word-of-mouth marketing seeing the business continue to grow and donate just under $11 million to charity as of October 2022.

“On March 3 we did 12 times our daily sales,” Mr Griffiths said.

“On March 4, we were going to do more than a month of sales in a day before we decided we had to change our website to ‘sold out’.

“We went back and analysed every single one of our social media mentions and found that 100 per cent of them talked about a social impact or environmental impact in one way or another.” 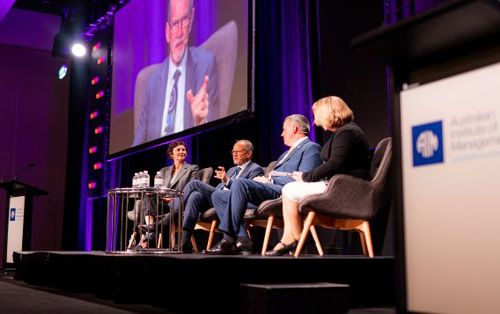 Mr Slocombe said despite the transition to renewable energy, oftentimes not being the most economically viable option, it is always the right thing to do.

“At the RAC Monkey Mia Dolphin Resort, all the power is delivered from diesel generators,” he said. “Economically it’s great because it’s not royalties, so it’s not taxed.

“However, a third of RAC’s carbon footprint comes just from those diesel generators.

“We’re in the process of putting in a business case for a $12 million solar plant –economically it actually doesn’t work but it’s the right thing to do.”

Professor Klinken said from a state and national perspective, the shift to renewable energy was the most important issue facing us for a prosperous future.

“Each industrial revolution has been associated with a change in energy – the first one was from wood to coal, and the UK maintained their superpower status around that,” he said.

“The second one was around oil and gas – that’s where America became the superpower.

“We’re now going to transition towards renewables and we are the best placed jurisdiction to take advantage of this – this is Australia’s moment.”

5. The future of the economy

The three gave their insight into what the future of the WA economy could look like and the potential of a global recession.

“We probably wouldn’t have a recession in Australia because we haven’t had as much inflation as North America,” Ms Cusworth said.

“We don’t have as much of an energy shortage and we are less reliant on America as direct markets compared to Asia.”

Mr Pereira said while prices for flights were high at the moment, he expected to see them simmer down, as the reactive demand for flights post-COVID-19 slowed down and more airlines and planes re-entered the market.

He also pointed to the possibility of a direct flight path from Perth to Los Angeles and Perth to Hawaii, positioning Perth as one of Australia’s travel hubs and boosting tourism.

ARC Industrial Transformation Research Hub Director Veena Sahajwalla emphasised the importance of the full lifecycle of e-waste and resources being a sustainable industry, but also an effective source of materials and future employment.

“While the traditional thought process of waste is linear, we’re starting to think about circular solutions but it is going to be complex,” she said.

These comments were echoed in the sustainability panel by Ms Chaney.

“I was fortunate enough to have a tour of the West Metro Recycling Centre to see what actually gets done with the e-waste and batteries,” she said.

“The big challenge we have here is scale and, for so many circular processes, you just don't have enough to make it viable.

“I think that will be an ongoing challenge for WA.”

Leading In A Time of Extreme Disruption

This virtual course, delivered in 90 minute sessions over five weeks, is for anyone who wants to understand what the future world of work looks like in order to cultivate the essential leadership skills that the "new norm" demands.