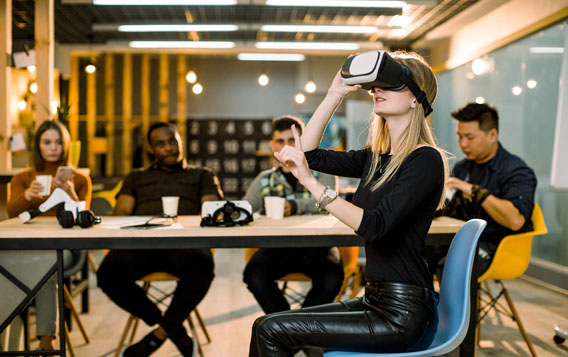 Gamification of business opens up a world of opportunity

Critical thinking, problem solving and communication are crucial skills needed in a multitude of industries and, with technological advances such as virtual reality taking hold, gamification in the workplace has seen gamers become a vital part of the future.

The global gaming industry is expected to scoop more than $200 billion in revenue by 2023 – roughly the gross domestic product of Australia’s sister country New Zealand.

Undeniably coming a long way since Nintendo introduced Donkey Kong in 1981, video games have become a cultural juggernaut and beloved pastime for people all over the planet.

Though heavily stereotyped as an outlet for young people, recent research reveals several other demographics are emerging as gaming enthusiasts, including a 32 per cent rise in the number of gamers aged 55-64 between 2018 and 2020.

Interest has spiked 28 per cent among grandparents in the same two-year period, and married people are also increasingly enjoying a good gaming session.

Looking at what exactly is being played, analysts at consumer data research company GlobalWebIndex have found a 24 per cent jump in the number of people diving into simulations.

Popularised by 1999 science-fiction film The Matrix, simulation games copy various elements from real life and have been the foundation for several famous video game franchises, including The Sims, Animal Crossing and Stardew Valley.

Simulations are used for training, analysis and prediction and have coincided with a 15 per cent leap in use of puzzle and strategy games.

With the world expecting an onslaught of three billion gamers by 2023 and interest in training and strategy games flourishing, business leaders have already begun speculating on gamification in their workplaces and how a generation of tech-savvy people can value-add to their companies.

In particular, the world’s mining giants have assessed the natural synergies between gamers and remote control of heavy-duty equipment, as they look for solutions to workplace accidents, vast geographic distances and productivity limitations.

Mining behemoth Rio Tinto has been especially vocal in this space, with Integrated Operations General Manager Ryan Harnden sharing that modern games were harmonious with the company’s staff goals and operation centres.

“Game simulations have become so accurate they are often used to train people in a safe environment before they go to sites,” Mr Harnden said.

“Technology is also enabling greater opportunities for a more diversified workforce, for example, heavy mining equipment can now be remotely operated by a person in a wheelchair."

“Our Perth centre is mission control for our fleet of autonomous trucks, trains and drills which drive and operate on mines 1500km away.

“They even drill holes and break rocks using gaming consoles.

“We harness new and emerging technologies to make our operations more efficient, safer and more environmentally friendly – and we do this all the way through the mining life cycle, as we explore, design, build, operate and close our assets.”

Describing Rio Tinto operation centres as similar to space mission control centres you might see in an American movie, Mr Harnden said each room was filled with screens that showcased site activity in real time.

All mines, ports and rail systems are able to be operated from a single location, and powerful software, predictive maths and inventive computer code are used to spotlight inefficiencies and map out improvements. 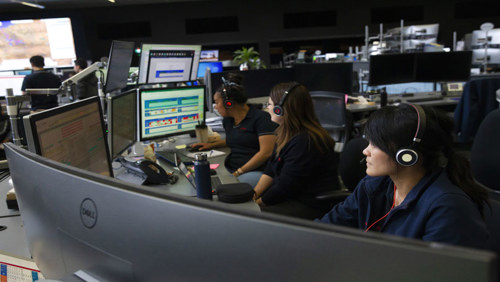 Mr Harnden said across thousands of kilometres of minesite, Rio Tinto controllers managed everything from loaders to haul trucks to rock crushers.

“They make sure equipment is in the right place at the right time, they ensure equipment meets the day’s production targets, and they respond to disruptions like breakdowns or delays,” Mr Harnden said.

“Through Rio Tinto Visualisation (RTVis) – a 3D gaming engine to help us see inside our operations – our controllers can fly over a site and dive down to the detailed information they need.

“They can hover over an excavator, follow a haul truck or examine an orebody.”

The 3D gaming engine has already been highly advantageous for the mining giant, including producing more accurate drilling and blasting, reducing the need for explosives and enabling trucks to carry less waste products and more ore.

About 1700 people use RTVis across 98 per cent of Rio Tinto mine sites globally, with each being capable of receiving software updates within a matter of hours, leading to big savings in time, effort and expenses.

In a bid to sharpen its competitive edge, Rio Tinto has played a pivotal role in shaping a new generation of Western Australian tech heads who are quick with their fingers.

Their long-standing partnership with The University of Western Australia includes support for a Girls in Engineering outreach program which pushes interactive science, technology, engineering and mathematics (STEM) activities into Year 7, 8, 9 and 10 classrooms.

The multinational’s partnership with Scitech is another attempt to elicit curiosity and excitement in children, by supporting a number of travelling live science shows, the Aboriginal Education Program, RoboCup Junior WA and the Rio Tinto Innovation Central interactive exhibition space.

Mr Harnden said investing in a positive relationship between children and STEM was simply essential for the future of the Australian and global workforce, as more and more companies look to leverage technology in their business model.

“Young people will need skills like critical thinking, problem-solving, automation, systems design and data analytics to be best equipped for the jobs of the future,” Mr Harnden said.

“As an organisation focused on technology and innovation, Rio Tinto recognises that an increased emphasis on STEM education is critical for our future.

“Today, almost all our people work alongside technology in some way and, given the rapid pace of innovation and digitisation, this will only increase in future years.”

To wrap it up

Though the thought of operating a minesite from hundreds of kilometres away might make some people nervous, Rio Tinto employees have said staff work with equipment largely no different from the consoles used to fire up a game of Fortnite.

According to process engineer Payam Lillo, who breaks rocks from the comfort of a Rio Tinto control centre, the job was made for the 68 per cent of gamers in Australia and the billions of enthusiasts around the world.

“The rock-breaker is operated by a gaming console exactly like the ones in living rooms and bedrooms across the country,” Mr Lillo said.

“So an ideal candidate for the job of operating the rock-breaker would be somebody who is not only into gaming, but has a good attitude towards safety and has problem-solving and communications skills.”

With gaming a near ubiquitous hobby, more and more companies are expected to leverage the skills honed in the recreational activity and pipeline the tech-savvy and young into the jobs of the future.

Mr Harnden said it was clear there was a place for gamers in the modern workplace, and Rio Tinto would be sure to cultivate that pathway between the living room and the office.

“As a company, we strongly believe in collaboration between governments and industry on the future of work, ensuring education systems are providing students with the right skills for a changing world,” he said.

Ryan is General Manager Integrated Operations Iron Ore at Rio Tinto. You can connect with Ryan on LinkedIn