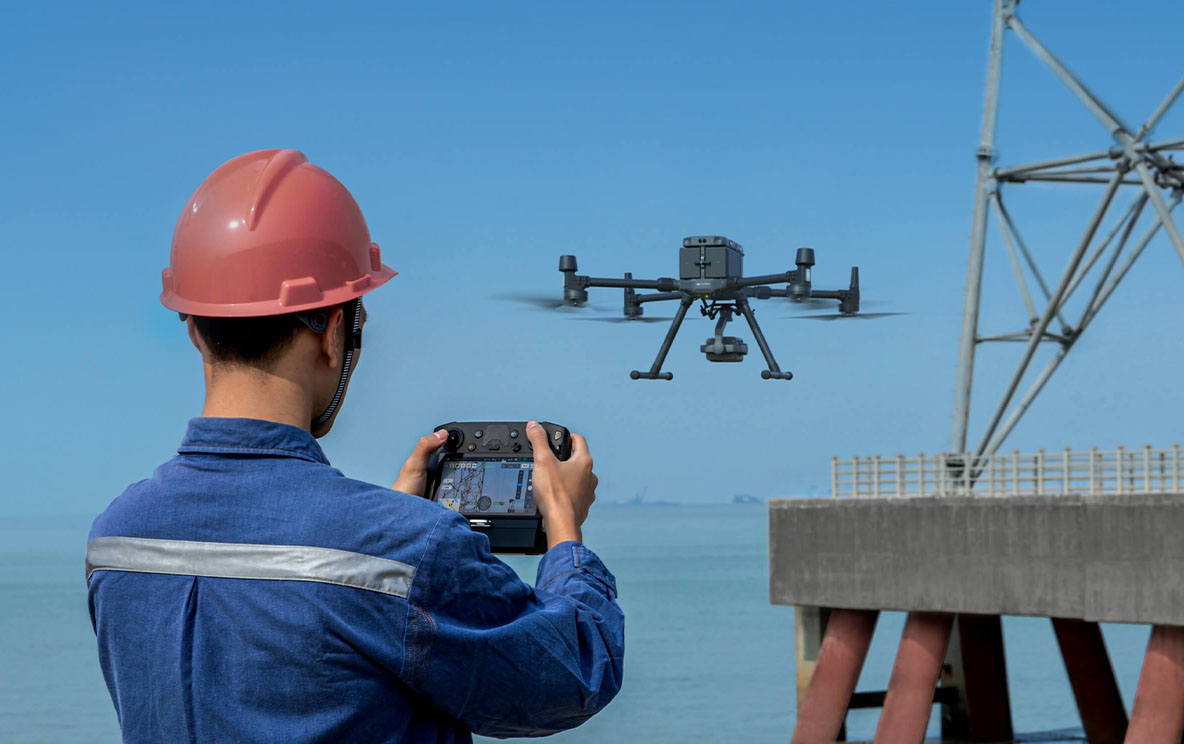 The sky is the limit

Businesses and industries continually face challenges to improve their efficiency and reduce risk but, as technology improves, more are innovating their practices, with drones becoming the frontline device for business applications.

Drone usage has grown since it was introduced to the public, and this has never been truer in workplaces, with employees, companies and sectors adopting drones to improve productivity, safety and cost.

How it all started

Industry drone usage began as far back as 2015 in the mining, oil and gas sector, with Rio Tinto and BHP among the first to introduce them as an industry tool.

“Drones started to get some traction a couple of years later, around 2018,” said Global Drone Solutions Founder and Chief Executive Officer Mahmood Hussein.

“Businesses realised that it’s no longer a toy, it’s a very useful tool.”

Mr Hussein, whose business trains drone pilots, said drones were initially used in asset inspections on minesites, with as many as 500 applications, including maintenance and safety audits.

“For example, there are cranes, crushing stations, conveyors and mills on minesites, which needs to be inspected on a regular basis from a maintenance perspective,” he said.

“In the past, someone would climb up the crane to check all the different beams, the connections, the welds and everything else – it would take them days.

“Now, the same quality inspector, who’s an engineer, stands on the ground in a safe environment, capturing all that data with a drone and then making a three-dimensional digital twins of the asset.

“He can turn that image 360 degrees, he can inspect it anytime, he can share that information with anybody else – the owner of the asset or the engineers who need to maintain it.”

Mr Hussein said businesses soon realised that using drones for dangerous and difficult tasks such as this was not only safer but it was faster and cheaper.

“You don’t have to put people in difficult, dangerous and dirty locations,” he said.

“They can be out in a safe environment and capture that data.”

More than meets the eye

Going from strength to strength, Mr Hussein said the drone industry was more than just the drone itself.

“The other part is the payloads,” he said.

“We’re talking about digital cameras for photogrammetry, thermal, multispectral and LiDAR cameras for specialist applications – the list goes on,” he said.

“Drones can now fly underground in a mine because of the LiDAR cameras, which practically builds a virtual cage around itself, stopping it from crashing into the side of the wall or other pieces of equipment.

Mr Hussein said in the last three years, at the height of the COVID-19 pandemic, a company called Wing began delivering tea, coffee, food and medicine on the east coast.

When combined with beyond visual line of sight approvals from the Federal Government’s Civil Aviation Safety Authority, he said drones could similarly deliver necessities such as food and medicine to communities cut off in the event of a natural disaster.

“We now have drones that can carry at 200kg up to 200km away and we are working with a US company that can carry half a tonne,” Mr Hussein said, adding that Global Drone Solutions is collaborating with Murdoch University and Xplorate – partners of a Swiss drone manufacturing company – to try and show the government that drones can be used in natural disaster situations to reach communities.

While the project was currently not yet a reality, Mr Hussein hoped it could soon be.

“Here in WA, if we get permission, we will be delivering food and medicine next year to communities that are affected by disaster,” he said.

Meanwhile, Mr Hussein said drones were continuing to reduce risk in work environments outside of the norm.

“We’ve just trained work health and safety people, who are ambulance drivers, for a mining company,” he said.

“It takes about 30 minutes to drive into the company’s mine and reach the bottom of the pit.

“If there is an incident, the ambulance goes way down there but, rather than wait half an hour to get to the bottom, they fly a drone down and get a full overview of what’s going on.

“That data is livestreamed back to the control room to assess whether more ambulances and paramedics are needed.

“All that happens in about two to three minutes.”

Improving drone technology and applications has resulted in the industry advancing at a rapid rate, which Mr Hussein described as increasing fiftyfold, with anticipated benefits, especially in WA.

“Eighteen months ago, the Federal Government conducted a study on the potential economic benefit of drones to the Australian economy and realised that the benefit is in the billions of dollars,” Mr Hussein said.

“The government is very supportive of the drone industry and is removing red tape to help the industry flourish.

“WA was the first and only state in Australia to actually manufacture drones but now there are manufacturers on the east coast too.

“They are not only manufacturing small drones, they are also manufacturing drone taxis that can become drone ambulances – they can carry a patient and a paramedic for 200km and they use hydrogen as a fuel.

Teaching drone pilots since 2016, Global Drone Solutions has trained more than 30,000 people with a 98 per cent success rate, with Mr Hussein believing that more companies would be incorporating drone technology to their business in the near future.

“The rules have changed, allowing us to apply for beyond line of sight applications,” he said.

“I honestly cannot see anything that would stop or get in the way of increased implementation of drones as people realise the benefits.

Mahmood is the Founder and Chief Executive Officer of Global Drone Solutions, which was established in January 2016. He started the company when the drone industry was in its infancy, identifying the rapid adoption of drone technology in a wide variety of industries. The company has built a formidable reputation for delivering quality drone pilot training. As a result of Mahmood’s work, he was recipient of the 2022 Western Australian Pearcey Entrepreneur Award during the WA Information Technology and Telecommunications Alliance’s INCITE Awards. You can connect with Mahmood on LinkedIn

Workplaces of Tomorrow The future of work

How the workplace has changed and predictions for the future