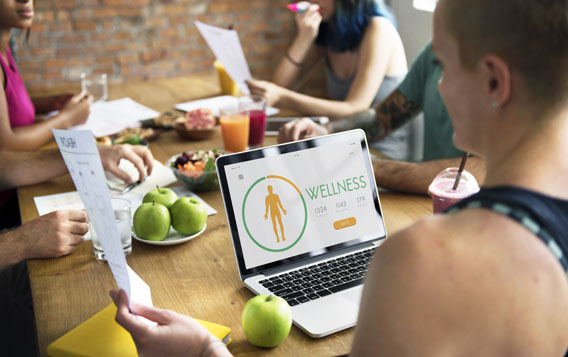 Health is wealth in the workplace

In recent times, a greater importance has been put on physical and mental health, with business leaders endeavouring to provide a healthy workplace environment for their employees.

She said, simply put, the benefits of investing in a corporate health and wellbeing program far outweigh the cost of not having one.

Why is corporate wellness important?

“Having a corporate wellbeing program helps to promote wellness from the top down, so the staff feel looked after, they’ll have a greater sense of loyalty and they’re less likely to move on, which is a huge plus to the company,” Ms Kelly said.

“It also promotes productivity with each other – the sense of happiness and wellbeing becomes contagious.

“Another positive side effect is becoming an employer of choice. Not only will your staff stay, you’re going to be attracting the premium people from around the world to work for you.”

What is a corporate health and wellbeing program?

Corporate wellbeing programs look different for each organisation, depending on the improvement areas in focus.

“Some elements could be educational in the form of lunch and learns, where you get educationals about things like heart disease,” Ms Kelly said. “June was Bowel Cancer Awareness Month, so it might be about educational lifestyle practices.

“Biometrics, flu shots, giving up smoking and career counselling might be involved, or nutrition, sleep and exercise could be keystones.

“Mental health awareness is another important one, it could be in the form of a laughter yoga workshop where the staff get to experience movement and a great flood of oxytocin.”

According to Black Dog Institute, depression and anxiety are now the leading cause of long-term sickness absence in the workplace.

One in six Australian workers experience a mental illness.

The Black Dog Institute found that in Australia, poor mental health in the workplace was estimated to cost the economy more than $12 billion each year, including over $200 million worth of workers' compensation claims.

“Corporate wellbeing programs have to be supported visibly from the executives down,” Ms Kelly said. “It’s about role modelling how to live well, not role modelling excessive overtime hours, stress and poor emotional intelligence.

“A lot of companies are stuck with old-fashioned views with a stigma around mental health.

“The more I work with young people, the more I understand they regard mental health and wellbeing as an everyday part of their lives in the same way physical health is viewed.”

Ms Kelly said a trend seen in Australian businesses over the past 20 years was the issue of presenteeism, which could be eradicated with a corporate wellbeing program.

“Presenteeism is when sick staff come to work, but they’re not working at the level that’s optimal,” she said.

“It is a huge problem for the human resources department, as people are turning up but because they’re really not well their mind is not there and they effect the whole team’s productivity and effectiveness, sometimes even compromising safety.”

In 2016, Safework Australia found that sickness absence and presenteeism had a direct impact on organisation productivity, with a low psychosocial safety climate costing Australian employers $6 billion per year.

According to Ms Kelly, when a corporate wellbeing program was introduced into the office, a lot of problems around social issues disappeared.

Setting up a workplace wellbeing program

When building a corporate wellbeing program, Ms Kelly said involving the employees in the design and components was really important.

“It’s got to be driven by them to some degree, otherwise there will not be that uptake in engagement,” she said.

“You can spend a lot of money on something and it could fail – so it’s important to offer them some choices.”

Ms Kelly said it didn’t hurt to consult experts outside of your organisation on how to construct a wellness program, either.

According to Medibank Health and Wellbeing Lead Emily Coppola, Medibank is evolving to help create corporate health and wellbeing programs for workforces on a national level.

“Medibank as a brand is famous for health insurance, and lots of people think about health cover when they think about Medibank, but our business has been through a pretty exciting change to now be a health company,” she said.

“Health insurance is only one part of what we do, now it’s a lot more holistic which allows you to bring all of Medibank’s capability across health and other types of insurances.”

In 2016, packaging and resource recovery company Visy partnered with Medibank to improve its workplace wellbeing program with a strong focus on mental health awareness.

“We transformed the way the organisation was talking about mental health by starting with the executives,” Ms Coppola said.

“We start with the senior leaders and lean into big challenges, particularly in a company like Visy where it’s so bloke-y.

“There was a really strong sense of stigma, so we broke that down right through to supervisors and team leaders to have better conversations.”

Medibank works across various industries to create unique corporate health and wellbeing programs using data, analytics and profiling to identify the key risks within the organisation.

“We’ll meet with organisations to see where they’re at in their journey and, in many cases, what that means upfront is to really get under the hood of health needs and risks to understand what’s going on,” Ms Coppola said.

“It might be healthy weight in a particular industry, risks associated with FIFO for mining and resources or sedentary behaviour across the professional services industry.

"The need to create a psychologically safe environment, as well as mentally healthy workplaces is also a high priority across the board right now.

“The workplace is an incredible opportunity to improve the mental health of all Australians.”

After setting up a health and wellness program, it is vital that you check on how well it is performing and what can be done to make it better.

Ms Kelly said key performance indicators were important, as nobody wanted to spend money on something without knowing what they got for it, however you might run into some difficulties if the organisation had casual workers.

“Obviously it’s easy to measure success against absenteeism, but it can get muddled when businesses employ casual workers,” she said.

“They’re not accurately measuring the sick leave because if they’re casual they just don’t come for their shift – it’s not in the statistics, so sometimes absenteeism isn’t a good way of measuring success.”

According to Ms Kelly, a better way to determine whether the program is working is by asking employees to complete a staff satisfaction survey which incorporates the same questions six or 12 months later.

“Things like performance reviews – finding out whether the workload is deemed reasonable by the staff, for example, is a better way of measuring success,” she said.

“Providing a healthy workplace environment and corporate wellbeing program for employees is a very worthwhile investment.”

Want to know more about developing an effective and measurable wellbeing program for your workplace? Take a look at our newly developed Create a Workplace Wellness Program.

Louise is a specialist in organisational talent development and capability building and facilitates on several of AIM WA's courses, including the Create a Workplace Wellness Program. You can connect with Louise on LinkedIn

Emily is Health and Wellbeing Lead for Medibank and has dedicated her career to improving the health and wellbeing of Australians through the workplace. You can connect with Emily on LinkedIn

Whether you're creating a workplace wellness program from scratch, or enhancing what you already have, this course  is for you. It includes aspects of designing or upgrading a program, from concept through implementation, to review.

Can your employees breathe easy?

What should you be doing to ensure indoor air quality at the workplace?

Mental and physical steps for executives towards a healthier lifestyle