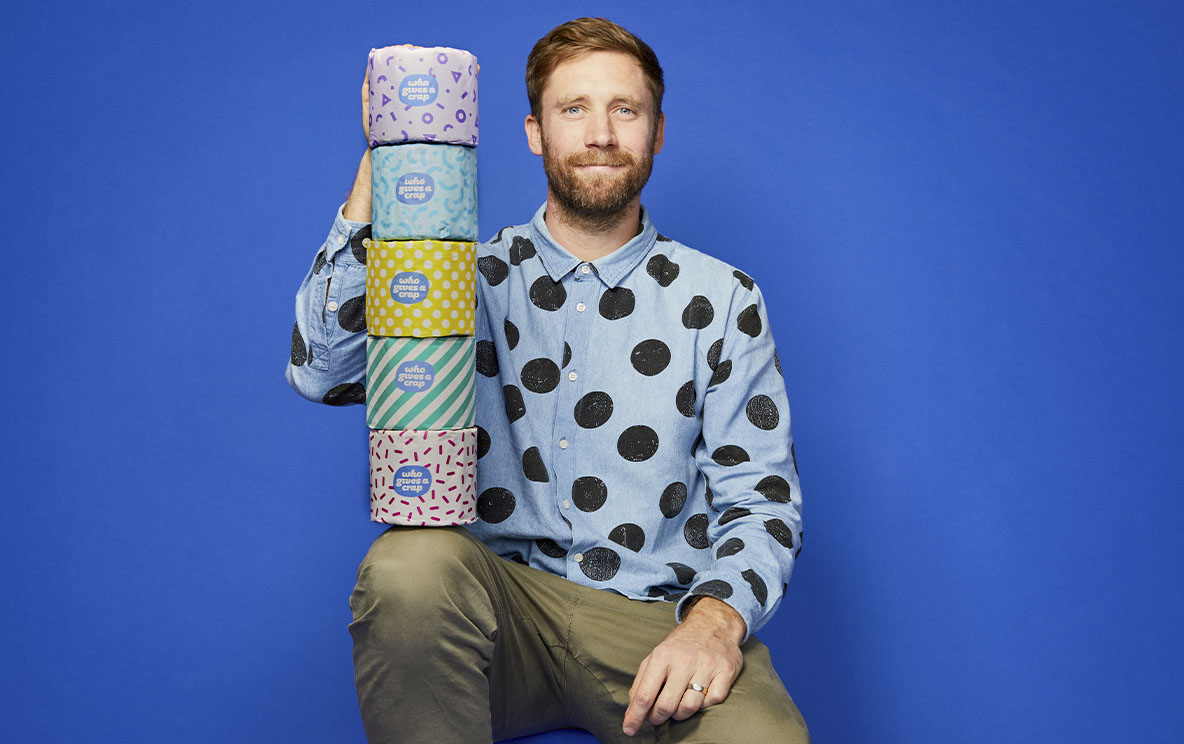 Co-Founder and CEO, at Who Gives a Crap Simon Griffiths

Solving the world’s environmental and sanitary issues one wipe at a time, Who Gives A Crap Co-Founder and Chief Executive Officer Simon Griffiths shares his triumphant success story as an entrepreneur and leader.

A keynote speaker at the AIM WA 2022 Leadership Summit to be held on Thursday October 13, Mr Griffiths grew up in Western Australia and strives to give back through business.

Originally an engineer and economist, Mr Griffiths took the leap into philanthropy and social entrepreneurialism, founding Who Gives A Crap under the parent company Good Goods in 2012 alongside Danny Alexander and Jehan Ratnatunga.

Primarily selling eco-friendly and recycled toilet paper, 50 per cent of the business’s profits go towards building toilets in developing countries across the globe.

Kicking off the initial funding through a crowdsourcing campaign, Mr Griffiths notably livestreamed himself sitting on a toilet in a warehouse for 50 hours until they reached the target of $50,000.

With 2.4 billion people globally at the time without access to adequate toilets, leading to diseases and death caused by poor water and sanitation, Mr Griffiths highlighted this as the main motivation for the company’s existence.

“It was the most off-track of all of the development goals that existed at that point in time,” he said.

“It’s a hard thing to raise money for compared to clean water, adult literacy or sight restoration, which are all much easier things to market and talk about in ways that are really appealing for donors.

“We saw the opportunity to work with a product we all use every day and use the proceeds to help fund sanitation initiatives and raise awareness around the sanitation problem.”

Standing out amongst the rest, Who Gives A Crap’s products comprise funky and colourful toilet paper, paper towels and tissues.

Releasing its first product in 2013, the business grew exponentially to the multi-million dollar company it is today, moving ahead of the curve with a business model that supplies consumers with the product directly through either one-off purchases or regular subscriptions.

“We found in one of our early business plans that if we did really well, we could maybe get our donations up to a few hundred thousand dollars,” Mr Griffiths said.

“After about eight years, we hit $10 million in donations and wildly exceeded our dreams.

“When we started, the term ‘direct-to-consumer’ didn’t exist. We were the world’s first online toilet paper company and now the world has shifted in the last 10 years to a place where what we do isn’t that abnormal anymore.

“We didn’t think we could be as successful as we have been – it has been an amazing journey.” 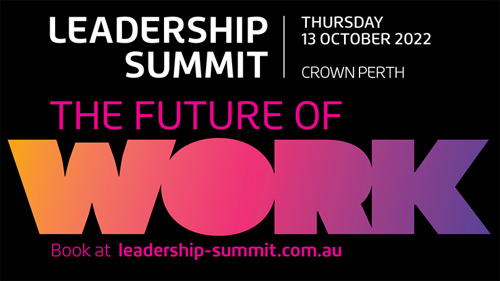 The importance of giving back

With the total donation count currently sitting just under $11 million, Mr Griffiths explained why philanthropy and giving back was so important to him.

“When you think about all the people in the world, we’re very lucky to have been born in parts of the world that give us access to free healthcare, really good universities and a lot of good education – we take these things for granted,” he said.

“Stuck within those billions of people, who are unable to access adequate resources and aren’t able to do those things we take for granted, are creatives, inventors and entrepreneurs, many of which will never be able to reach their full potential – to me that is the most mind-blowing thing.”

Stepping out of your comfort zone

Taking a left turn on his career, Mr Griffiths turned down his dream job as a corporate high-flyer to pursue social entrepreneurship.

He said taking the first step was the biggest hurdle.

“Often, we have these big lofty ideas and it can almost seem paralysing to get started because the concept and vision is so big,” Mr Griffiths said.

“That’s a very powerful way of making sure you start, and then use this momentum to propel you forward.”

While putting yourself and your ideas out there can lead to great success, Mr Griffiths said the success also came with difficult setbacks.

“In entrepreneurship, you are faced with new setbacks every single day – you are constantly trying to make a bet about what you think will happen and then going out and seeing if you’re right or wrong,” he said.

“Ninety per cent of the time, when you try something new, you are going to get something wrong.

“As a result, you have to get very comfortable with failing and accepting you’re not going to always get things right.”

“It’s incredibly powerful to learn how to build resilience because you have to get very good at it.”

Life as a leader

As Chief Executive Officer of Who Give A Crap, Mr Griffiths oversees about 200 employees, which may not sound overly impressive, but the fact that these employees are spread over seven countries is a feat.

“We’re primarily a digital culture – a remote-first company – but we do have co-working spaces in each of the city hubs that we operate from,” he said.

“We’ve made a commitment to our team that if there’s more than five people in a location then we’ll set up a co-working space for those individuals to come together and congregate.

“We believe that face time is incredibly important, but it’s not something that’s required every single day and so our digital culture is something that we are really proud of.

“It allows a very equitable and inclusive experience because someone doesn’t have to be able to make it into the office five days a week in order to be an equal part of what our culture is.”

With this unique and decentralised way of working scattered across various time zones, Mr Griffiths said leadership was required in all different levels and forms.

“In our business, we think about leaders as people who will lead a team of people, whether that’s a manager, someone who is working directly with individuals or a leader who is there to inspire and fit a vision and a strategy that allows the team to understand how they need to move things forward,” he said.

“We also think about leaders as being functional leaders – individual contributors, if you will – who are experts in their field and enjoy the excellence of the function that they operate in. Through their work, they lead by example.

“We take a broad view of what leadership looks like and it’s something that’s different for people at different stages or places in their career.”

“Ten to three decades ago, there was this view that in order to do good, you had to be successful at business first,” he said.

“In today’s version of capitalism – this post-capitalist world that we're living in – you have to actually do good in order to do well at business.”

Mr Griffiths said new-age consumers had become more conscious about where their money was going and endeavoured to support eco-friendly businesses.

“About 10 years ago, Tesla was an initial public offering car company, which not many people had heard of, reusable water bottles were being used by deep-green consumers and reusable cups were something that you just did not see very often,” he said.

“Now, think about where we are today, Tesla is the most valuable car company in the world, everyone has several reusable water bottles and reusable cups are now ubiquitous right across the entire world.

“Those three things tell us how far consumer sentiment has shifted in the last decade. With awareness around climate change, the interconnectedness of the world has become more and more evident.”

Heading into the future with a purpose

Thanks to the shift in consumerism and the success of Who Gives A Crap, Mr Griffiths said they had launched a sister company called Good Time, focusing on launching plastic-free hair and body products.

“The background behind the second brand is that Who Gives A Crap was always supposed to be one of many brands set together in a family-like structure.

“It ended up being a bit more successful than we initially expected, so it took us a bit longer than we’d hoped to launch the second brand.

“This is a massive test for us to try and understand whether we can reach the same customer, who has a certain set of ethics and values.

“If this works too, then it opens up the opportunity for us to solve many more problems for our customers in many other categories.

“That’s something to really watch out for in the next five years – looking at how we can start to solve more problems for our customers in their households.”

Book your spot at this year's Leadership Summit on Thursday 13 October at Crown Perth.

Come along for a day full of information, inspiration and ideas. You'll get insights on the latest Australian business data and workplace trends from social analyst and executive board advisor Mark McCrindle. Who Gives A Crap co-founder and CEO Simon Griffiths is sharing his insights on purpose driven leadership from the helm of this vastly popular and impactful organisation. And so much more.


Simon Griffiths is an engineer and economist turned social entrepreneur. In 2007, after turning down his dream job offer as a corporate high-flyer, he moved from Australia to South Africa to immerse himself in his true passion – development aid. There he discovered that the biggest problem faced by non-governmental organisations and social entrepreneurs is a lack of funding. Driven by a passion to use business to give back, in 2010, Simon had the idea to start a toilet paper company that builds toilets in the developing world. In 2012, he launched Who Gives A Crap with a crowdfunding campaign.You can connect with Simon on LinkedIn

Don't treat others how you would like to be treated

Inside the goldfish bowl

The Future of Work

Join us for a day bursting with inspiration and insights. This year's theme is The Future of Work. Keynotes include analyst Mark McCrindle, Who Gives A Crap co-founder and CEO Simon Griffiths,  ARC Industrial Transformation Hub Director Professor Veena Sahajwalla and PwC Partner Elizabeth Shaw.

Leading Others The rise of rainbow capitalism