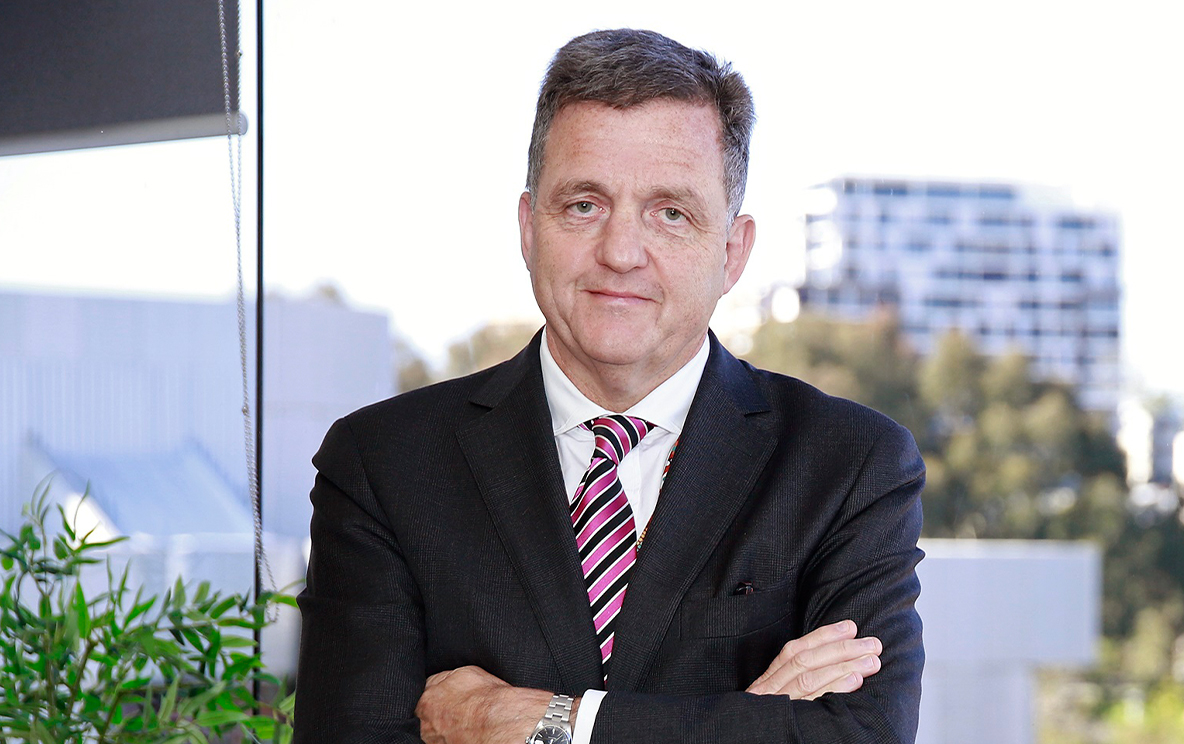 Taking on leadership often comes with unplanned and unexpected challenges – something Western Australia Department of Health Director General David Russell-Weisz knows all too well after steering the public health system through a period of significant reform.

From commissioning the Perth Children’s Hospital and the state’s flagship $2 billion Fiona Stanley Hospital, as well as the $1 billion dollar redevelopment of QEII Medical Centre and the COVID-19 pandemic thrown in the mix, Dr Russell-Weisz has certainly been thrown a leadership curveball or two in his career.

At an AIM WA Inspirational Leaders Series event, Dr Russell-Weisz dove into what it means to be an effective leader, even if that includes owning up to your mistakes and admitting to needing an extra helping hand.

Originally from Edinburgh, Scotland but raised in the Channel Islands and schooled in England, Dr Russell-Weisz credits his leadership inspiration to his parents.

Born in what Dr Russell-Weisz describes as the wrong era, his mum was a strong and influential person to him.

“In those days, when you got married you gave up your job, but she was a formidable tax inspector,” he said.

“When I was told by my house master that I would never be a leader, I would have very poor prospects and would never hold a senior position, my mother responded to the house master and said, ‘how dare you tell a 13- or 14-year old that they’ve got no prospects’.”

Dr Russell-Weisz said his father was a forgiving man, who also had a major influence on his leadership journey.

“He had lived through two world wars and everything that went with it,” he said.

“While we still have wars and devastation throughout the world, I always think about what my parents and their generation went through to give us the chances we have today.”

After relocating to Australia in 1993, Dr Russell-Weisz joined the Royal Flying Doctor Service in Broken Hill, New South Wales before moving to WA and working in rural WA as a locum general practitioner.

Making his way to the north west to serve communities in regional and remote parts of WA, Dr Russell-Weisz unintentionally found himself in a leadership role.

“When I went to the north west of the state, I worked as a Senior Medical Officer and fell into leadership quite by default,” he said.

“I’m always a great believer in clinicians becoming leaders and managers – if you’ve been on the ground, on the front line, you understand how things work.”

Later, as Chief Executive Officer of the North Metropolitan Health Service (NMHS), Dr Russell-Weisz led the redevelopment of the QEII Medical Centre and then the commissioning of Fiona Stanley Hospital.

“It was quite a jump to managing the NMHS, and commissioning a hospital such as Fiona Stanley, but after eight years in the north west, you get to see the real challenges in delivering healthcare,” he said.

“I saw the immense amount of support you have in healthcare in the metropolitan area.

“It’s very much the same to this day in rural and remote locations – you have a great team but there can be very little support at times.”

During the clinical commissioning of Fiona Stanley, Dr Russell-Weisz and his team learnt the importance of focusing on the staff within the hospital not just the grand reveal of new infrastructure.

“It’s all about the people and the work they do, and the services they deliver within the hospital,” he said.

“I hope that’s what we learn about healthcare delivery and in big commissioning projects in the future.

“Everything goes into the shiny, grey, white or green infrastructure when, really, we need to think much more about what’s in it.”

To ensure projects have the smoothest landing, Dr Russell-Weisz always refers to his experience as a pilot and goes through a thorough checklist of key considerations.

“The checklist goes back to my pilot days – you do a checklist as a pilot on a plane and are rigorous with it because you want to be safe when you take off,” he said.

“I’ve used this approach in many of my leadership roles.”

From governance, to scope, project management and rigour, to team skills, engagement and budget, there’s much to consider when tackling a project.

In Dr Russell-Weisz’s time in leadership, he has faced various challenges – one of which was the issue of lead in the water at Perth Children’s Hospital.

With no other hospitals experiencing this unique problem, Dr Russell-Weisz said they had to go back to basics, reassessing the issue at its core.

“Sometimes you’re too close to a problem,” he said. “You need someone entirely new to come in and ask them to have a look for you.”

After much trial and error, Dr Russell-Weisz looked further afield to overcome the challenge.

“I remember looking at a similar issue in Hong Kong about an apartment block that had a lead issue,” he said.

“It isn’t just about healthcare. The issue was mainly about flushing water, so we went back to basic science.”

Dr Russell-Weisz also touched on significant healthcare challenges such as the COVID-19 pandemic, expressing humble pride in the work done by the complete health sector over this incredibly challenging time.

“We all had one aim for the pandemic – we wanted the softest landing possible,” he said.

“You have to stand back and look at everything for what it is.

“As a leader we also need courage and resilience to admit our own mistakes.”

Dr Russell-Weisz highlighted the importance of sticking to your gut instincts and allowing yourself downtime to process your day and switch off.

“If you smell a rat, there probably is one – go with your instincts,” he said.

“You need downtime as a leader. Running is my meditation, and you need something like that when you’re in a high-pressure role to switch off.

“You’ve also got to have humour as a leader and not take yourself too seriously.

“Always keep your good name, own up to your mistakes, but never take yourself too seriously.”

Russ is the Director General of Western Australia’s Department of Health, a position he has held since 2015. As Director General, he has driven the public health system through significant changes, including significant devolved governance changes, the commissioning and opening of the Perth Children’s Hospital, and with the Chief Health Officer steering the WA Health system’s response to the pandemic since early 2020. Russ is now responsible for overseeing the implementation of the State Government’s Sustainable Health Review.

How to overcome the challenges of internal and external communication