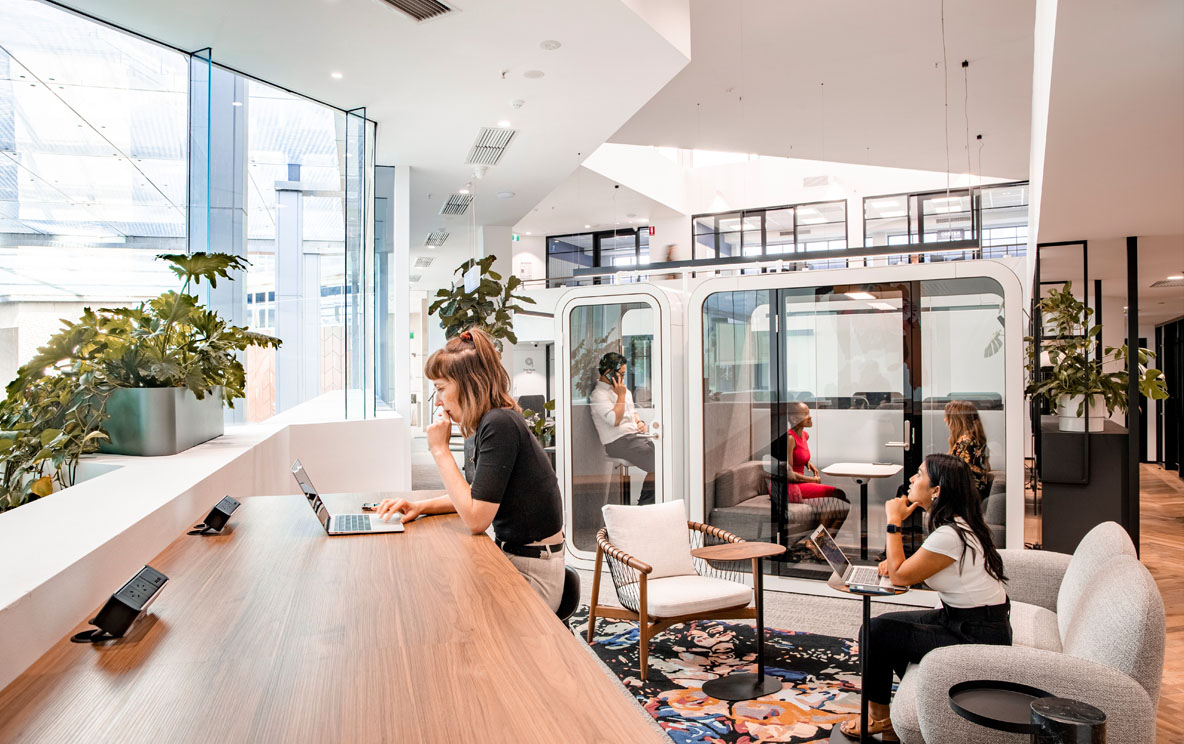 Spacecubed: Coworkers at Fern, powered by Spacecubed and in partnership with Mirvac

For Spacecubed Founder and CEO Brodie McCulloch, innovation and entrepreneurship are two crucial components to getting a start-up business off the ground.

Speaking to Workplace Conversations he said while these qualities had become easier to foster in recent years thanks to changing attitudes towards investment and the continued rise of technology, this had not always been the case.

In fact, the barriers to entry that existed for small businesses in Western Australia less than 10 years ago proved to be the impetus for Mr McCulloch’s own ambitions.

Recognising a gap in the market and working out a way to fill it was, in many ways, an exercise that proved his own business case.

“I saw a big gap in how entrepreneurs and innovators were being supported in Western Australia,” he said.

“We've got these big social, environmental and economic challenges coming and at the time, the people who created all the jobs and new ideas and innovation, I couldn't see them getting the support they needed to keep doing that.”

Working to facilitate peer-to-peer networks, reduce barriers for people starting up and connect them more efficiently to extra levels of support, Spacecubed has grown to provide flexible coworking, office spaces and assistance programs for businesses of all sizes, working to foster the kind of environment that rewards innovation and progress.

Spacecubed’s bread and butter, however, has always been start-ups.

While the old adage ‘you never know until you try’ rings just as true for business as it does with everything else, Mr McCulloch cautioned against going all in straight out of the gates and betting the house against a new start-up idea, advocating instead for a more prudent approach.

“When I was starting Spacecubed, I wanted to ensure my business was innovative and entering the market at the right time,” he said, noting this was where it paid to go slow.

“There is a range of factors that go into an idea and making a new business successful. Being too early or too late can both be bad outcomes, so it’s important to be able to test the waters and see if there is the right market size and whether it’s the right time for the product or service.”

For Spacecubed, Mr McCulloch said this go-slow approach meant it wasn’t the end of the world when it turned out the business was one or two years too early to properly settle in and make an impact in its area.

In fact, he said it proved advantageous, as it gave the business extra time to assess the market and find its feet.

“Arguably, we opened Spacecubed a year or two too early in its market. We’ve seen things really grow in particular over the last five years,” Mr McCulloch said.

A big proponent for collaboration, Mr McCulloch said a corporate partnership with Stockland in the early days of Spacecubed had provided both an initial capital investment and some flexible lease agreements.

“We did our first space as a corporate partnership with Stockland, where we got some flexible leases,” he said. “This allowed us to test the model for Spacecubed, without taking too much risk, meaning if it didn’t work out, we weren’t going to lose the house.”

“So that initial risk that you can argue Stockland took has meant that now we occupy over 7000sqm of office space.”

On the team building front, Mr McCulloch highlighted how local programming was an excellent way for both companies and individuals to meet people with different expertise and knowledge.

“I think when learning from others, whether that’s through mentors or via networking, it’s now easier than ever to access those networks of support,” he said.

“There’s about 40 groups that meet in our spaces each month, meaning members can go along and meet software developers or marketing people can meet other marketing people that may have skill sets that they may or may not have, for example.”

Funding and supporting a business startup

On the all-important question of financial standing, Mr McCulloch said the capital needed to operate many small businesses had shrunk considerably in recent years thanks to technological advancements.

“The cost of starting up and growing has reduced massively and people using technology has grown massively,” he said. “This means there’s a lot more opportunity, not only in Perth, but in Western Australia.

“I think this is one of the big things that has changed over the last, even five years, but the last probably say 10 to 20 years especially – you can build a global business from Perth.

“The tools to do this that were available 20 years ago would have cost millions of dollars and had to be custom built, whereas now you can just pay a monthly software subscription and access the same level of services, skills and talent from around the world that otherwise just wasn't possible before."

“I think the barrier for starting up has reduced significantly."

"Now you can do a prototype of an idea and test it with real customers very inexpensively, compared to the past when you had to actually build the whole thing.”

In addition to the reduced costs, Mr McCulloch said opportunities were growing for companies to obtain initial funding.

“We are starting to see this change, however.

“There are corporates such as RAC, Hawaiian and Woodside which are investing alongside smaller family-run investment offices to actually take that early-stage investment to companies that they feel have potential.”

Integral to connecting these larger businesses with fledging operations are a variety of programs and initiatives which have begun to proliferate in recent years.

Currently, Mr McCulloch said there were more than 140 different programs, initiatives and funds for start-ups in WA alone, which he said had enjoyed a significant increase in popularity.

“When we started Spacecubed, there was a real lack of early-stage programs for people who had an idea, or wanted to gain some skills to grow and deliver on what they were doing,” he said.

“So this gap meant that there was a real opportunity for us to listen to our members and understand what they needed, and then deliver programs which would be sustainable and could keep growing as required.”

The orchestrator behind programs such as She Codes, a female-focused program with the ambition of empowering women within the coding industry, Mr McCulloch said the driver behind this and other programs at Spacecubed was listening to what people wanted. And seeing where the majority of people and companies were at, then targeting programs to suit. 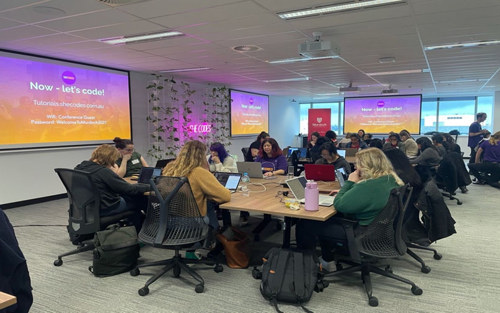 A She Codes workshop hosted by Murdoch University and Spacecubed

“For some people, it’s really early stages for their idea, so they need a quick sort of program, compared to companies that are a bit further along and need a more intense support program over a six-month period and access to early-stage funding,” he said.

Mr McCulloch said She Codes was a prime example of a program that had grown in response to demand.

“We saw a gap in the market for this, and now we’ve had over 6,000 women go through the different types of She Codes programs,” he said. “Whenever we have a program set up, they sell out within a couple of days, so there’s way more demand than supply for these sorts of programs.”

A case for constant reinvention

There’s nothing like a pandemic to force leaders to learn on the run, or to underscore what they are doing right and what they are getting wrong.

Just as it has done to businesses across all industries, COVID-19 presented a large hurdle for Spacecubed, but one which forced the adoption of more flexibility and the forging of a more resilient business approach.

Experiencing an 80 per cent decline in revenue as a result of the crisis, Mr McCulloch said it reinforced the idea that listening to customers should always be the top priority and businesses should always be ready to shift gears.

“I think any business or business person that isn't reinventing themselves and really staying close to their customers is going to be in trouble more quickly than they probably thought they would be,” he said. “We've had to reinvent our business in the last 18 months. That's really important, and I can't see that slowing down.

“Business owners and leaders need to stay really focused on their customers and make sure the products they're delivering are still relevant.

“We had to shift the products we were delivering online last year and we had to pivot how we were using office space.”

Revealing the company’s online shift had been successful to date, Mr McCulloch warned there was never any room for complacency, pandemic or not.

“We can look at what we've done and it's been successful today,” he said. “But that doesn't guarantee it will be in the future. So we need to keep listening to customers and making sure we're delivering services and products that they want.”

You've started-up, now where to from here to grow your business?

Raising capital is critical for any developing business and yet few leaders and executives have experience of running successful capital raising campaigns.

Attending "The Art of Raising Capital - Strategic Optionality and Scaling", a two and a half day workshop with AIM WA - UWA Business School Executive Education on April 4 - April 6 2022, will maximise your potential to successfully secure the capital needed to develop your business.

Brodie is the Founder and Managing Director of Spacecubed. He is passionate about building ecosystems that support people and organisations who are interested in building the future of work. You can connect with Brodie on LinkedIn

The Art of Raising Capital - Strategic Optionality and Scaling

This workshop is for start-up entrepreneurs and executives running small to medium businesses looking to expand. Presented by Patrick Kedemos, Managing Director of Avanguard Capital and Financial Modelling teacher to the Masters of Applied Finance at UWA, you'll walk away with the skills to maximise your potential for successful business development and capital raising campaigns.

Awards for business are a win for the community

The 2022 AIM WA Pinnacle Awards are open. An award winner, a judge and a writing specialist share their tips for successful entries

Life on the inside

The expanding role of the CFO