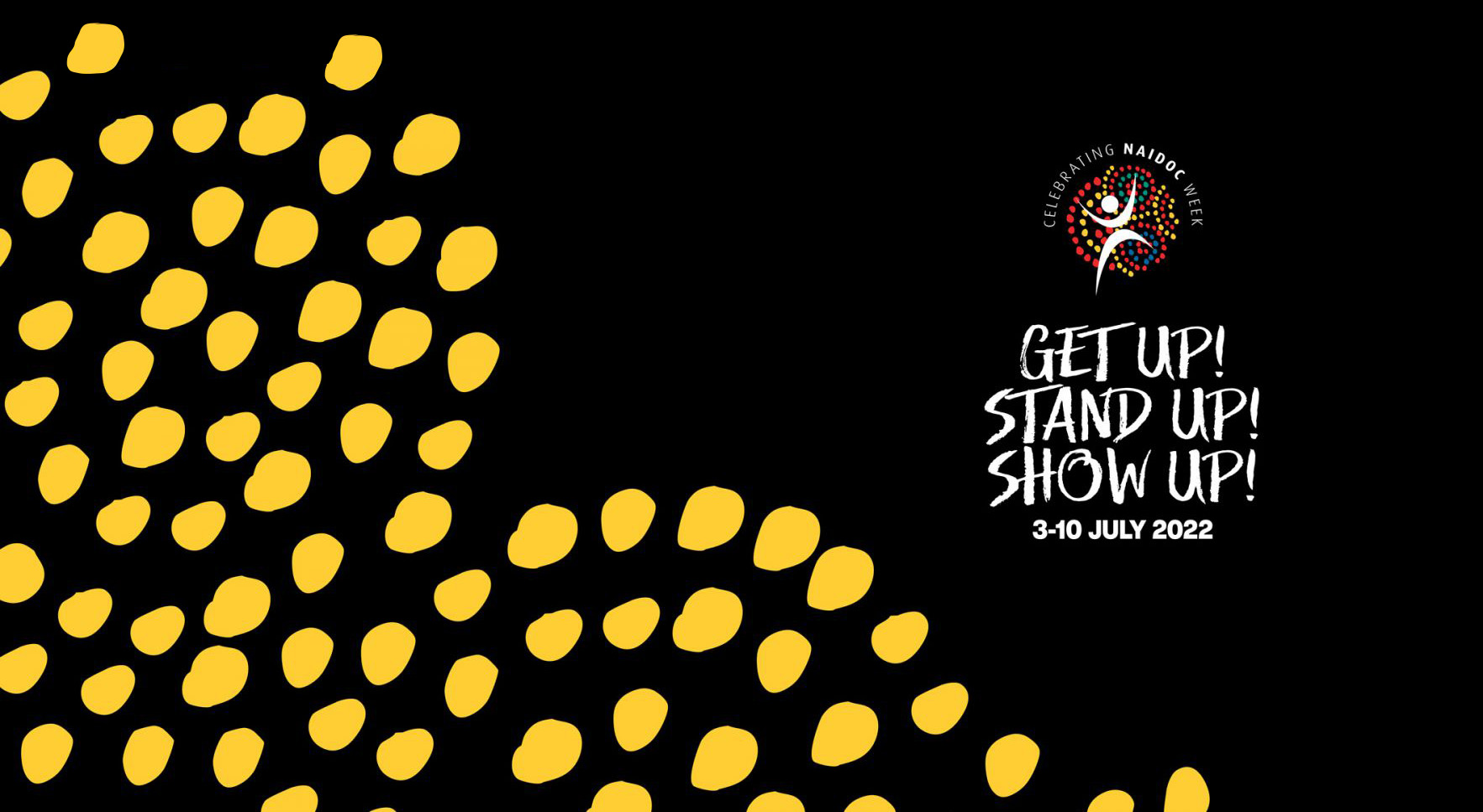 Looking after our future generations

The challenges and potential solutions for systemic change

National NAIDOC Week celebrates and recognises the history, culture and achievements of Aboriginal and Torres Strait Islander peoples, while providing an opportunity for people across Australia to learn about the challenges facing First Nations peoples and acknowledge what needs to change to create an equitable society.

This year’s theme is Get Up! Stand Up! Show Up! to highlight how everyone must continue to act for systemic change.

Descendant of the Gija people from the East Kimberley region of Western Australia, Author and Legendary Development and Training Director Greg Bridge FAIM said there had been a whole lot done in education, training, business, economic development and health for Aboriginal people, but there was still more that needed to be addressed.

One sensitive issue Mr Bridge pointed to was the findings and recommendations from the Aboriginal Deaths in Custody Report from 1991.

What is the Aboriginal Deaths in Custody Report?

In August 1987, then Prime Minister Robert ‘Bob’ Hawke, announced the formation of a Royal Commission to investigate the causes of deaths of Aboriginal people while held in state and territory prisons.

The commission was established in response to public concern that Indigenous deaths in custody were too common and poorly explained.

In 1991, the final report was passed down, which summarised the findings of individual reports, discussed underlying issues and suggested 339 recommendations to address the significant amount of deaths in custody.

“A lot of the recommendations that came out of the Aboriginal Deaths in Custody Report – in most cases – have not been addressed,” Mr Bridge said.

“I don't believe that we talked a lot about it.

“After Mr Ward’s passing in the prison van in Kalgoorlie, I was contracted as a third-party auditor for the company to assess the training compliance and duty of care strategies in the moving of persons in custody that were being delivered by the private prisoner transport company at the time.

“I got involved in that to look at their training, their employment and their processes on how to manage and communicate with prisoners in custody, whether being from an Indigenous culture or non-Indigenous culture.

“After Mr Ward’s death, I became the training manager to help drive new change after the inquiry into his passing and helped the contracted company progress to the end of their contract.”

Mr Bridge said Aboriginal deaths in custody was the most sensitive area of Aboriginal affairs that Australia had ever had.

“People go into a fear mode – they don’t want to know about it,” he said.

“I’d just like to remind people about the Aboriginal deaths in custody and how that was actually the blueprint as to why we've got reconciliation.”

Mr Bridge said about 37 per cent of those incarcerated in metropolitan prisons were Aboriginal and as high as 85 per cent in regional prisons.

“When it comes to justice – more incarceration – it's an area where a lot of people don't want to go,” he said.

“But I believe that we can make an impact, work in a collaborative way and bring more parties to it.

“They don't have to have all the answers, but they might have some resources or be able to assist in bringing it forward.”

What other challenges needs to be addressed?

Mr Bridge said another issue that Aboriginal people continued to face, which might impact their own future and later generations, was their health.

“Aboriginal people are challenged through their own health,” he said.

“Their health is paramount to their ongoing progression for sustainable employment and future quality of life.”

Mr Bridge said many Indigenous peoples had taken up fly-in, fly-out work, which could take a toll on them.

“They have their own family challenges and issues of the traditional cultural lifestyle that go on, which impact them emotionally,” he said.

“FIFO itself is a challenging experience – being away from home, away from your spouse and children.

“Family issues can be very upsetting, stressful and frustrating when you are working FIFO and having to manage your personal matters at work while trying to cope with being far from home.

“The first thing to be impacted in a situation like this is your health.”

Mr Bridge said many First Nations peoples had to figure out how to work through this and mentally process their reactions to issues taking place at home that were in need of their attention.

“When you are away, it becomes very tough,” he said.

“Indigenous people, both male and female, are most reluctant to come forward and share issues, as it may impact them staying in their jobs.

“It is important for the employee to be able to approach their employer or company to express their challenges and feel supported.

“When employees don’t feel the support, this – in a lot of cases – forces the employee to leave their place of work and return home without a job.

“Health and wellness is a key part to people enjoying their work and having opportunities for job promotion, diverse pathways, financial control and better quality of life for themselves and their family.”

Although there has been improvements in recent times, with companies assisting Indigenous employees in many ways to encourage retention and self-development, Mr Bridge believes businesses and leadership teams can do a lot more.

He said many Indigenous people had experienced challenges with holding down work when they had old fines, minor accidents or minor infringements, ranging from unpaid speeding tickets to unregistered vehicles or driving without a licence.

“On average, a minimum of eight days is served for people paying off fines in prison for defaults, and those fines could go as far as 45 to 90 days,” Mr Bridge said.

“This has been a highly discussed issue for Indigenous people trying to retain their employment and aspire for a better quality of life for themselves and their families – to get off welfare and provide a life that will bring harmony, financial control and new beginnings for future generations.

“There are still companies who have not introduced fair, flexible and reasonable adjustments to working with Indigenous people when they are challenged on the sidelines due to personal fine defaulter issues.

“It may be that the companies are not all that approachable for someone in this situation. The Indigenous person themselves may feel embarrassed to approach or seek guidance.”

Mr Bridge said it was imperative for businesses to be more aware of the challenges Indigenous Australians faced and introduce new approaches to assisting them in their employment when a crisis occurred.

“Businesses can buy in more and work with governments and relative departments to come up with a new model of working through fine defaulter issues and put in place arrangements for better outcomes instead of incarceration, taking away their driver’s licences or doing community work that stops them holding their job.

“These things stop everything they want to do in having a successful life.

“There needs to be more done and communicated between businesses, Indigenous groups, departments and Indigenous people to work towards a better outcome and not have the justice system continue to determine one's future over an unpaid speeding fine for an unroadworthy vehicle.

“This will continue to disadvantage Indigenous people moving forward for many reasons.”

Although Mr Bridge doesn’t know what the end result will look like, steps such as the incorporation of a Reconciliation Action Plan (RAP) are steps in the right direction.

A strategic document with practical plans for action, which sets out how an organisation is committing to contributing towards reconciliation with Aboriginal and Torres Strait Islander peoples, Mr Bridge said by 2029 most companies would have a RAP.

But it is more than just employing and training an Aboriginal person to getting the job, Mr Bridge said businesses were now obligated to understand more about Aboriginal people and their culture, and the communities they operated in.

“Some leaders and businesses might not have a correction or justice background, but they are intelligent people who might be able to come up with ways we can look at things differently and minimise the risk to ensure we have a duty of care process in place that protects everybody,” he said.

“Leaders can stand up and say, ‘this is about seeing how we can impact housing, environment, infrastructure and supporting Aboriginal communities, as well as how we can best try and improve the outcomes of Aboriginal deaths in custody’.”

“We can start to, hopefully, see some positive approaches when looking after our future generations and reduce the number of people involved in the justice system.

“Then we might start to change some of the wounds that have taken place and, psychologically, we might be able to start to move positively in a new direction.”

Descendant of the Gija people and Director of Legendary Development and Training, Greg has two decades of experience in commentating on and facilitating human behaviour in the workplace, as well as the impact of language use. Greg is also an author, writing on the topics of workplace chronic illness and relationships progression change. You can connect with Greg on LinkedIn

And why you should get involved

How the workplace can play a role in sustainability