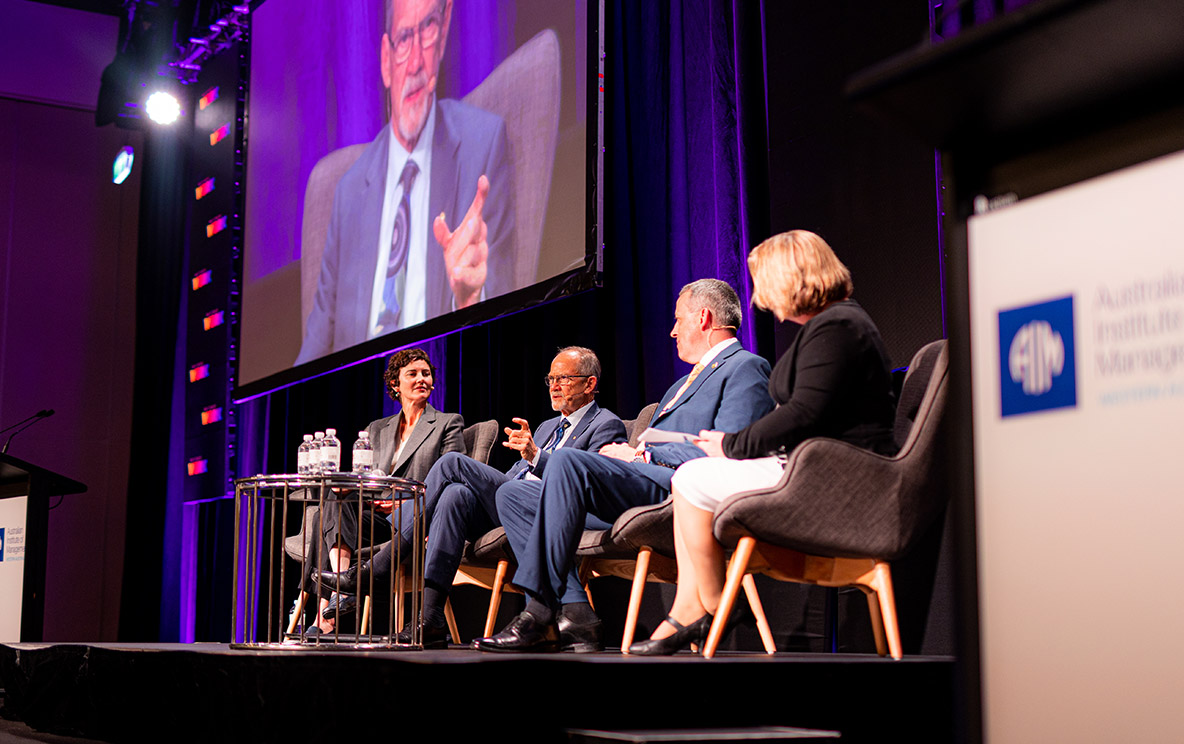 Moving towards a greener future

Why sustainability now makes for a strong business model

Sustainability panel at the 2022 Leadership Summit

If there was one take away from AIM WA’s Leadership Summit 2022, it would be the importance of sustainable energy practices in Australian businesses. Even if it is not necessarily a financially viable option in the present, it is an investment for the future.

Dr Klinken said the last Federal Election was, essentially, a referendum on climate change and stability, highlighting how strong a political issue this is in modern Australian society.

“I think the country decided they wanted to be part of the solution,” he said.

“There was a change in government and there were members like Kate Chaney, the teal movement and The Greens with more votes.

“There’s a very clear signal from the Australian public that this is where they want the government to go after a decade of inactivity.

“I’m cautiously optimistic about where we can go to from here.”

While a move towards a more sustainable and environmentally friendly nation has been brought to the forefront on a political level, Dr Klinken said change needed to be acted upon now to position Australia, and especially WA, as a global green energy pioneer.

“The energy transition is the most important issue, it is Australia’s, and particularly WA’s, biggest opportunity for a long-term prosperous future,” he said.

“However, we’re still operating in a small, linear mindset and not really embracing all of the different elements that bring it together.”

Dr Klinken said the opportunity to spearhead the next industrial revolution through renewable energy needed to be taken.

“Each industrial revolution has been associated with changing energy,” he said.

“The first one was going from wood to coal, and the UK maintained its superpower status from that.

“The second one was around oil and gas – that’s when the US became a superpower.

“We’re now going to transition towards renewables, and there is a slow upswing – about five per cent of the world’s total energy comes from renewables."

“We are the best-placed jurisdiction in the world to do an orderly transition to a renewable future."

“If we get energy security up, we set the state of this country up for the next 15 years – this is a pivotal moment.”

Mr Slocombe agreed, saying he is both inspired and frustrated by the current progress.

“I’m buoyed by some amazing initiatives being generated out of the industry, but I’m frustrated by the fragmented way of putting policy together,” he said.

“There is a belief that transition will be good, fast and cheap, however most of us know that you can only have two of these.”

Already taking the right steps to a renewable future, RAC is one of the big name corporations making a difference in WA towards renewable energy at large scale, implementing the RAC Electric Highway across the state – an electric vehicle charging station network that is the biggest in the country.

Mr Slocombe said while oftentimes this transition to renewable energy was expensive, it was always the right thing to do.

“At the RAC Monkey Mia Dolphin Resort, all the power is delivered from diesel generators.

"A third of RAC’s carbon footprint comes just from those diesel generators," he said.

“We’re in the process of putting in a business case for a $12 million solar plant –economically it actually doesn’t work, but it’s the right thing to do.”

Giving customers the choice of a sustainable future

On a micro scale, many companies and organisations across the country are taking sustainable practices into their own hands, empowering consumers to support these practices through their purchases.

Mr Griffiths said consumers were now more conscious than ever about where the money they spent was going, making a deliberate choice with every purchase to contribute to a green future.

This has been highlighted through the success of Mr Griffiths’ 100 per cent recycled toilet paper company, which uses 50 per cent of the profits to build toilets in developing countries across the world.

“We’ve seen our impact and our donations as an incredibly powerful marketing tool in many different ways over the years,” he said.

“Probably the most quantifiable all of those was in the early stages of the COVID-19 pandemic, where the world ran out of toilet paper and customers started to see photographs of empty toilet paper shelves in supermarkets on social media.

“They started asking, ‘why are you buying toilet paper from the supermarket when you could be buying from Who Gives a Crap?’ and saying, ‘look at all the positive social and environmental good they are contributing to the world’.”

Mr Griffiths said the shortage of toilet paper and word-of-mouth promotion from the organisation’s philanthropy created the perfect storm, which correlated directly into sales.

On March 4, 2020, Who Gives a Crap was set to make more than a month’s worth of sales in a single day before selling out.

During the Leadership Summit Q&A, Mr Griffiths said every organisation or business had the power to make at least one small change towards a sustainable future or a greater purpose in the world.

“Every company does have purpose – you just need to think about exactly what that is,” he said.

“Doing good is good for business, so can we – as a whole – start to integrate more social or environmental impacts into our businesses?”

Innovation and problem solving is another key driver for a sustainable future.

As technology rapidly develops and improves for various electric and building products, more outdated products and materials are discarded for slightly better technology.

Professor Sahajwalla said many of these discarded products, such as solar panels and motherboards, were extremely rich in valuable metals and materials.

She said end-of-life cycles and a circular economy was the future of business and sustainability, reducing the mining and manufacturing of raw materials while creating a new sector of work and a local supply of materials.

“We know how to make batteries, energy storage systems and complex devices, and we can 3D print products,” she said.

“However, what if we could actually do all of this by using materials that have been reborn and reformed over and over again?

“Our waste batteries and waste hard drives that contain magnets could actually be brought back.

“Imagine if different towns and communities were actually part of a supply chain solution and everyone was able to contribute their resources.

“If we could do all of this, suddenly, we’re talking about a whole new way to think about supply chains.”

Professor Sahajwalla said materials, such as copper, tin and other precious metals found in e-waste, were more concentrated on circuit boards compared to what was dug from underground, meaning these circular economy factories could have a higher value or materials in low volumes.

An eye-opening example, which Professor Sahajwalla highlighted, was the aesthetic potential of unsuspecting materials, pointing to UNSW Sydney’s Green Ceramics splashback tiles made from clothes and textile waste mixed with waste glass.

“If you have synthetic fibres like polyester going into your clothes, those molecules are still useful and they can be put into a manufactured product – that’s exactly what we've done,” she said.

“While the traditional thought process of waste is linear, we’re starting to think about circular solutions.”

Ms Chaney said in order for change, there needed to be a shift on how the topic was presented.

“One of the things that has been a real shame about the last 10 years is that the narrative around transition to renewable energy has been fear-based,” she said.

“It has been about everything we have to lose and the risks involved.

“We need to be looking at what our economy will look like in 20 years and what we’ll be providing, like jobs for our children and grandchildren, and what investments we need to make now that will unlock that.

“We need to be thinking about what it will take to open up renewable energy in the Pilbara or Geraldton – there are opportunities that require some government investment in transition and have the ability to unlock huge growth in the future.”

And why you should get involved

How any office can become more environmentally friendly