Career choices for people with disability

The Periscope Crew shows disability employment can be done differently

After finishing high school, making a kick-start on your career is a highlight for many, with endless possibilities and pathways to take.

However, for people with disability, it’s not just about getting a job, it can be a struggle to feel secure, challenged and passionate about the career opportunities available.

As a one-eyed West Coast Eagles supporter, James Cockman hopes to one day work for the blue and gold team.

“It’s been a dream of mine to work for the West Coast Eagles,” he said. “I’ve been to every Grand Final since I’ve been alive.”

Mr Cockman was born with a condition known as arthrogryposis multiplex congenita – caused by a BICD2 mutation in his spine.

“When you have a disability and finish high school, there aren’t really any jobs available to you,” he said.

“You land in a job that you don’t really have a passion for.”

With a huge passion for live sports, Mr Cockman has been learning the ropes of filming and editing with The Periscope Crew as a crew member – an organisation of young creatives and filmmakers with disability telling stories from their perspective.

“I love The Periscope Crew community and being able to meet so many new people with disability,” he said.

“When I was in high school, I didn’t really know what I wanted to do and then this opportunity came up and it’s been a really good way to learn some new skills.

“It would be great to see more inclusion in the media and for more people with disability to have the same amount of opportunities as anyone else.”

Working alongside The Periscope Crew Videographer and Mentor Dylan Maynard, the pair have accomplished a lot during their time together – from working with the West Coast Eagles to interviewing tennis players and Olympians.

“I joined The Periscope Crew as a mentor in September 2021 and I’ve loved it ever since,” Mr Maynard said.

“I wanted another outlet to do more videography and The Periscope Crew allows me to do that.

Usually found out and about interviewing sporting stars or busily editing up their work, Mr Maynard said The Periscope Crew had been a rewarding opportunity for the duo.

“I’m at James’ house quite a bit,” he said. “I’ve worked with James for close to a year now.

“Whether it’s a corporate job or a community job, we work with the crew and teach them how to film, how to edit videos or even take photos.”

Inclusion and accessibility in the media industry

Bringing passionate cinematographers, photographers, interviewers and anchors together, The Periscope Crew was founded in 2020 to give young people with disability the opportunity to pursue their passions.

For Soul Gestures Inc Chief Executive Officer Catherine Kolomyjec, it was about bringing marginalised young people together and giving them the confidence to chase their dream jobs.

“I met most of the crew when I was working as the Head of Community Relations at Sacred Heart College,” she said.

“A few of them did internships with me, and I found that they all had amazing talents in different areas of media.

“Towards the end of 2020, I had a shower moment where I thought, ‘none of these guys are working in what their passions are, they’re doing more traditional disability employment jobs’.”

Ms Kolomyjec said a core objective for The Periscope Crew was for members to one day secure a job in the media industry.

“In the end, it’s just young people following their dreams like everyone else when they leave school and get a job.”

“James said early on that he just wants people to see him as himself, not just as someone in a wheelchair first,” she said.

“For the long term, I hope some of these amazing young people are able to get jobs in the mainstream media and film industry." 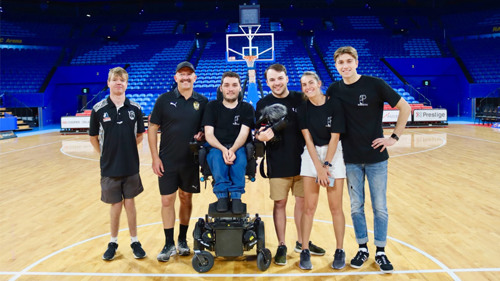 “I hope they can advise the Western Australian film and media industry on inclusion and accessibility – it only takes tiny tweaks.”

For The Periscope Crew, it’s about being equal – with a philosophy that mentors and crew members are paid the same dollar.

“James got his first ever pay check out of this – they’re out there earning money,” Ms Kolomyjec said. “The crew members are getting paid proper wages.”

“Working with sporting organisations, we can create social media folders where they can get reels, photos and a highlights film,” Ms Kolomyjec said.

“We did it for RugbyWA and they ended up using our footage on Channel 9 for the Wallabies versus England game.”

If you don’t know, just ask

As for her sage advice to employers, Ms Kolomyjec said it’s about understanding the challenges people with disability were presented with and knowing when to make small adjustments to suit their needs.

“If organisations take their time to see the person, they’re going to have extraordinary workers,” she said.

“Some of the changes might seem really insignificant but are really huge for people with disability.

“For example, our website meets all the disability requirements globally, as far as font, colour and contrast – it could be as simple as making websites more accessible.

“The best way to find out how you can be more inclusive is just by asking someone."

Visit The Periscope Crew website for more information and to meet James Cockman, Dylan Maynard and the rest of the crew.

About Catherine Kolomyjec
Catherine is Co-Founder and Chief Executive Officer of Soul Gestures Inc. The Periscope Crew was founded in 2020 to give young people with disability the opportunity to pursue their passions in media. You can connect with Catherine on LinkedIn

About Dylan Maynard
As a Videographer and Mentor at The Periscope Crew, Dylan is passionate about sharing his skills and collaborating on projects with fellow crew members. You can connect with Dylan on LinkedIn

About James Cockman
James is a crew member of The Periscope Crew and has a passion for editing, filmmaking and interviewing. He collaborates with many fellow crew members on various projects. You can connect with James on LinkedIn

Career Development Moving up the ladder

How to handle your new promotion seamlessly