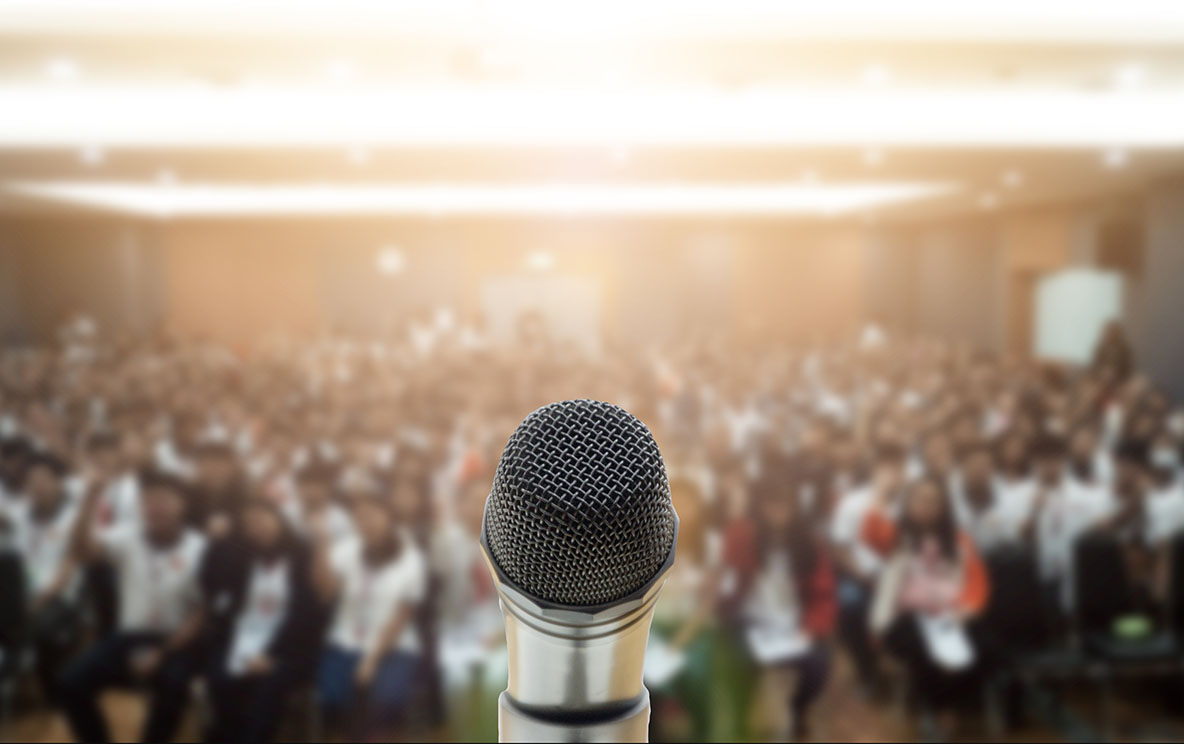 Fight the fear of public speaking

Does the thought of speaking in front of a group of people make you sweat profusely, forget how to string sentences together, make you lightheaded or even make you physically sick to the stomach?

If you answered ‘yes’ to any of the above, you are not alone.

A phobia of public speaking does not discriminate and some of the most experienced public speakers still get nervous before addressing a crowd, whether that is a boardroom of colleagues or an audience of hundreds of people.

Health and Community Psychologist Dr Marny Lishman is a keynote speaker and a media commentator who speaks in front of audiences and cameras on a daily basis.

Dr Lishman said the fear of speaking in front of people was in our DNA and came down to our ancestry.

“Public speaking is a performance that is in front of people, so it is extremely daunting and very uncomfortable to most people,” she said.

“I think, psychologically, it comes down to human beings being wired to fear judgement, fear rejection and fear failure.

“If our ancestors made a mistake in front of the group, they would have been kicked out of the pack and very vulnerable to predators.”

Dr Lishman said avoiding public speaking was a big no-no and would often lead to a long-term fear.

“A lot of us tend to remember mistakes we made while public speaking, and then we keep avoiding it and never really jump into the fear or train ourselves to do it well, which exacerbates the fear,” she said.

“Avoidance strengthens fear, so make the commitment to start as quickly as you can but in very small steps.

“Expose yourself in a comfortable way and, gradually over time, your brain will get enough evidence to realise it is safe and nothing terrible is going to happen if you make a mistake.”

Chatterbox Public Speaking Founder Shil Shanghavi was diagnosed with a stuttering challenge when he was 10 years old and his fear of public speaking stemmed from there.

“For most of my life, I haven’t been able to communicate and say my name, which has fuelled years of communication fear of any sort which, in turn, fuelled my fear of speaking in public,” he said.

“The thought of standing up in front of an audience of any size – whether it’s two or 200 – is enough to give me migraines, panic attacks, anxious meltdowns and a complete dismantling of my mind and my body.

“As I grew older, I realised if I let this phobia continue to control me, it would be impossible for me to build relationships, have relationships and live comfortably in my personal life, let alone my professional life.

“Then I realised in my professional career, everything involved communication so, to manage my fear of communicating, I decided to teach myself public speaking.”

Mr Shanghavi taught himself public speaking through hours of practise and repetition and then put his strategies to the test.

“I started to volunteer to deliver presentations, I pushed myself to go to networking events and to speak up more in team meetings,” he said.

“Each time I did, I would apply the techniques I had been teaching myself.”

One of Mr Shanghavi’s techniques to manage the fear of public speaking is programming music into his head.

“For the last 30 years, I have programmed progressive house music into my head,” he said.

“I’ve got over 100 tracks, which I have programmed into my mind. I have memorised their time signatures, their peaks and their troughs and I speak to the rhythm of the music.

“However, speaking to music doesn’t solve all my stuttering and I struggle with pronouncing words that begin with the letter L onwards.

“To pronounce them, I speak to the time signatures within each track. I combine this with a finger tap, which distracts my mind so I can stay fluent.

“I then marry the music and tapping with conscious breathing and slowing down to control the rhythm of my speech.”

Dr Lishman said another key strategy was to embrace who you were and to be authentic.

“I do public speaking every day and I muck up every day,” she said.

“The more you are authentically you with your public speaking, people actually like you being a real person.

“Don’t be scared of being you and cracking jokes and owning up to your mistakes – be real, you don’t have to be polished.”

Dr Lishman said the rituals you had before going on stage or into a meeting were really important.

“For me, I always make sure I’m doing exercise in the morning,” she said.

“To ensure I release all my stress, I’ll do some sort of meditation and play music in the car really loud before I go on.

“Sitting for a moment and anchoring in to a previous time where you did something really well or felt really confident and brave is a really good strategy.

“Deep breathing before you have to speak counteracts the nervous system and almost turns off your fight or flight response, which comes on when you have a phobia or when you’re anxious.”

Mr Shanghavi said his strategies were an ongoing process and weren’t only about the day of speaking.

“I have a strict diet because the more I can control my diet, the more in control I feel of my body.

“On presentation days, I never have coffee before speaking.

“I also never take a phone call before presenting in case it’s a call that makes me feel uncomfortable, I never check emails and I stay away from scrolling on social media.”

More tips for those with a public speaking fear

“Purposefully put yourself in situations that are safe,” she said.

“Sign yourself up for a five-minute spot on a comedy stage, or I often recommend my clients sign up for improvisation classes.

“Putting yourself into situations where you have to speak, but for a small amount of time, will desensitise your brain.

“Practise in front of friends or work colleagues first, so your brain learns that it’s not a scary thing and that you’ll be okay even if you stuff up.”

Mr Shanghavi said public speaking phobia would not go away but we could learn to control it.

“The level of preparation dictates how comfortable we feel and my tip would be to prepare at a meticulous level,” he said.

“A simple tip would be to pick up your phone every day for 30 days and record a video of yourself speaking and share it on your social media platform.

“From there, speak to two people at home, then your colleagues at work, start going to networking events and introduce yourself to a group of people and then expand it even more and ask if you can have a spot to present at that event.

“Take one step at a time to build confidence and feel what it’s like to present to an audience.”

How virtual reality and artificial intelligence can help

Mr Shanghavi developed a virtual reality (VR) product two years ago with a goal to help people become more accustomed to the fear of public speaking.

“I designed the VR platform where I can put a headset on and then I put you onto a conference stage, into a boardroom or into a networking environment to face people and immerse yourself in a virtual environment to see what it’s like to be in front of an audience,” he said.

“There are currently four environments in the VR – three use computer avatars and one is a pre-recorded audience with 360-degree technology.

Mr Shanghavi said one of the areas of speaking that fascinated him was data.

“I have been working with a company in the US and we have built an artificial intelligence (AI) platform that my clients now have access to.

“The AI records you and gives you analytics on how you speak, measuring your eye contact, smile, pausing, pace, language, repetition, jargon, structure and flow.

“It’s beneficial to have a tool like this that gives people data to measure what they’re like as a presenter.”

Marny is a health and community psychologist, author, leadership mindset coach, keynote speaker and media commentator. She is also the Psychologist and Facilitator for the mental health charity organisation A Stitch In Time. You can connect with Marny on LinkedIn

Shil is a public speaking specialist, storyteller and a highly regarded speaker coach.
He is the Founder of Chatterbox Public Speaking, the Head of Speaker Coaching for TEDxPerth, a board member at Guerrilla Establishment and a presentation mentor for Impact 100 WA. You can connect with Shil on LinkedIn

Inbox zero is fleeting, but you can regain some control

How good is small talk? Said no-one ever