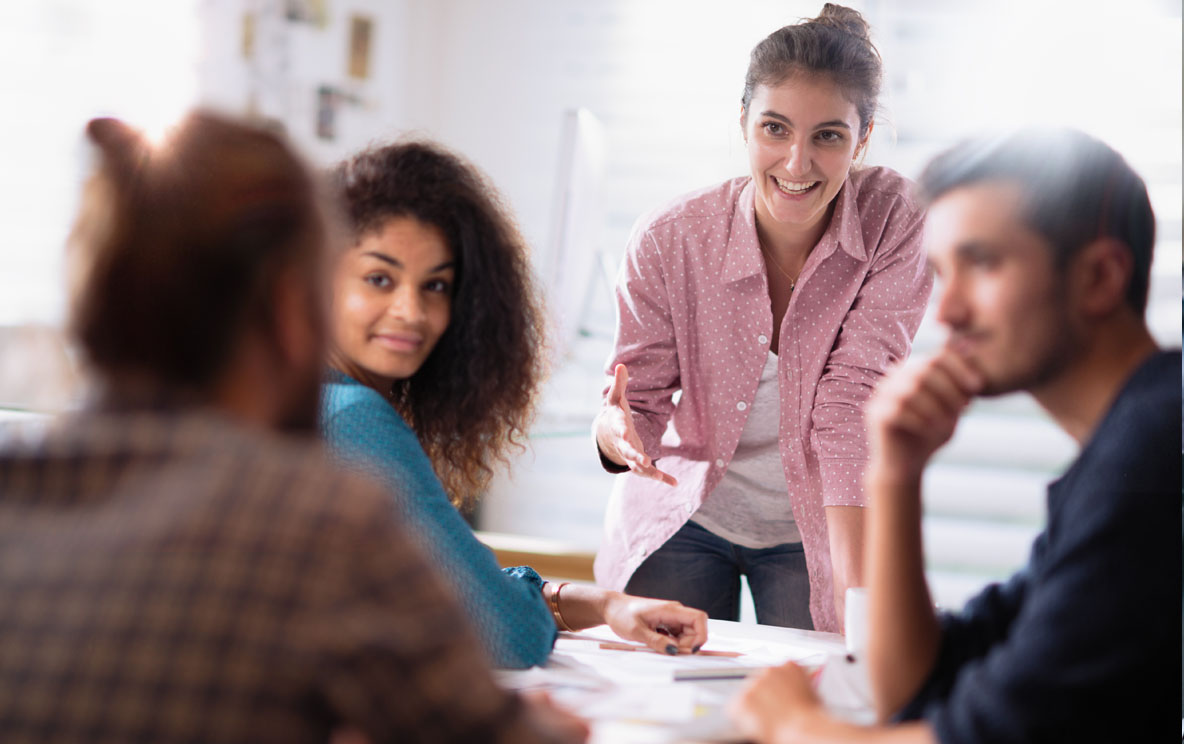 The secrets to successful task delegation

In the wise words of John C Maxwell author of The 21 Irrefutable Laws of Leadership and The 21 Indispensable Qualities of a Leader, "If you want to do a few small things right, do them yourself. If you want to do great things and make a big impact, learn to delegate.”

But like many things in a leader’s role, delegation isn’t necessarily an easy skill to acquire.

In fact, for many people who step up to a supervisory or management role, the shift from doing to leading is one of the hardest transitions to make.

Once mastered, though, delegation can help your team run like a well-oiled machine.

Delegation isn’t simply dividing work into tasks for others to complete.

AIM WA Head of Product Design and Delivery Graeme Robb FAIM said it was important to first understand you could delegate authority and share responsibility, but not accountability.

He explained the three words were often used interchangeably, but when it came to delegation, there were distinct differences between them.

Authority is seen as the delegatee’s assigned right, within the scope of their role in the delegated task, to take action and make decisions.

Responsibility is task-specific, being the obligation of a delegatee to properly perform the assigned task.

Accountability is the process of ensuring delegated authorities are assigned effectively to the delegatee, so they can complete the task within a defined set of parameters.

Mr Robb said it was also wrong to swap the terms “delegation” and “empowerment”.

“Delegation is task-based, giving your team members an opportunity to act on your behalf to complete one of your tasks,” he said.

“Empowerment, however, allows your team members to act on their own behalf to take initiative and make decisions on a task of their own.

“Effective delegation should therefore create a sense of empowerment in the delegatee and even the team.”

Excuses for not delegating

“I can do it quicker myself”; “I don’t want to load my team up with too much work because they’re already too busy”; “I’m going to hold on to this task – it’s the sort of work that got me promoted”.

If any of these sound familiar, they’re probably just excuses – and hence invalid reasons – for not delegating arising from a perceived lack of time, concern about overburdening the team and role insecurity.

Mr Robb said the shift from doing to leading after being promoted to a supervisory or management role could result in these and many other counter-productive thoughts and behaviours.

“A fear of failure can cause leaders to hold on to work that should be delegated,” he said.

“This comes with excuses such as, ‘I don’t trust them to do the task right – or do it as well as I can’.

“Love of detail can also be a major issue, with the delegator getting stuck in doing the ‘fun stuff’, which should have been delegated, thus freeing them to do ‘important stuff’.

“Lastly, precedent stops us from delegating because our supervisor or manager doesn’t practice or see the value in delegation.”

By overcoming these, Mr Robb said leaders could potentially reap many benefits.

When done well, delegation won’t just lighten your workload, freeing up your time to focus on more important tasks. It can also be used as a training and development tool for your team, as well as a way to show trust and confidence in staff.

“They will enjoy a sense of participation, it enriches their jobs and gives them a feeling of belonging,” Mr Robb said.

“It also allows you to build succession planning into your team.”

How to select a task to delegate

Mr Robb said considering how to select a task would help you focus on your motivation for delegation.

For example, does it lead to one or more of the above benefits? Or are you just ‘dumping’ it onto someone else to get it off your hands?

To help with this, Mr Robb said it was important to answer the following questions to determine if you should delegate a certain task.

1. Is this a task that one of your team members can do, or is it crucial that you do it yourself?

2. Is the task time-sensitive, but doing it will compete with other higher-priority tasks?

3. Is there a team member who already has the necessary expertise to complete the task?

4. Will the task recur regularly in the future?

5. Is the task teachable?

6. Will you have enough time to delegate the job effectively?

Mr Robb’s word of warning: while it may vary for different roles and organisations, some of the things that shouldn’t be delegated include tasks that are confidential, have legal ramifications or require a level of risk or decision-making that would be unfair to delegate to someone at a lower level.

You also shouldn’t delegate boring tasks that demotivate team members, tasks delegated to you by your supervisor or manager to identify your skill or competence, or messages of praise or discipline.

“Praise and discipline messages are part of a supervisor’s role,” Mr Robb said.

“The only exception may occur if your organisation requires someone in a higher position or HR to be involved in certain disciplinary discussions.”

Six steps in the delegation process

Once you understand what delegation is, the three components and what you should and shouldn’t delegate, Mr Robb said it was common to follow six steps to set the right environment for successful completion of a delegated task.

Step 1: Think ahead and try to delegate in advance

Don’t wait for a crisis to occur and then delegate. Define the desired result accurately, so that both you and the delegatee will have the same picture of the completed task and identify the right person in terms of existing and potential abilities, attitude and personality.

Be aware of selecting team members who are currently completing more important or higher priority tasks; already overloaded with work; or are going on leave in the immediate future. They’re already trying to complete their normal tasks before they go and may not have enough time to successfully complete the task.

Outline what the delegatee will be responsible for (based on the person and the task), including your expectations around reporting – daily, weekly or on completion? Staged check-ins – “Let’s meet when you get to ‘this stage’” and contingency – “Update me if this happens”.

Last but not least in Step 1, define the resources that the delegatee will be able to use and outline their level of authority in the task.

Step 2: Arrange a time to meet

Remember, you’re asking them to take on a task you should do and you have a good reason for doing so. Your meeting should reflect the importance of the delegation and that it is not being dumped on them. It should also only be done after you have fully prepared.

Step 3: Meet and discuss the items you came up with in Step 1

This includes the who, what, why and when (and maybe the how and where, if necessary). Remember to take your time, especially if you’re dealing with a less experienced delegatee (a gradual transfer of responsibility will allow both of you to absorb what’s involved).

Allow the delegatee ample time to question and discuss the task with you and make sure the delegatee understands the significance to both themselves and the organisation of a job well done and of a job poorly done. Clearly identify how you will measure success.

Once you’ve delegated a task, trust the delegatee. Let them get on with it and allow them to decide whether or not they need your help and guidance. Your panic attacks will be lessened if you have set agreed reporting, stage, and contingency check-ins as outlined in Step 1.

Ensure you stick to the reporting and check-ins that have been agreed. Follow through with any agreements you’ve made with regard to providing human and/or physical resources to help get the task done. This may also mean advising other team members, other teams or other leaders in your organisation of the delegated authority your chosen delegatee has been given to complete the task.

Depending on how competent the delegatee is with the task, this could range from a short “thanks – great job”, to a full-blown analysis of what was done well and what could be improved next time.

1. Not letting go – at some stage you’ll have to face that you can’t do it all. Until you come to that realisation, you’ll find it very hard to delegate anything.

2. Lack of clarity – ensure your message to your delegatee is clear and they fully understand the outcomes that are expected.

3. Overwhelming others – beware of delegating too much at one time. Provide the information to the delegatee in manageable chunks.

4. Micromanaging – if you provide the right environment, including appropriate training, reporting and clear direction, there should be no need to micromanage.

5. Not enough authority – you need to ensure the proper amount of authority is provided for the delegatee to complete the task.

6. Not allowing for mistakes and, yes, even failure. People aren’t perfect, and mistakes can and do happen. Help your team members learn and grow by creating an environment that shows understanding when people make mistakes, to allow for growth and change and, ultimately, to get better results for the team and the organisation.

AIM WA's New Supervisor course helps you to develop the skills and techniques for effective communication and relations between you and your staff. Among the key take-aways are effective delegation techniques, ways to manage interpersonal and intergroup conflict, applying leadership principles and how to support the organisation's operational plan.

About Graeme Robb FAIM
Graeme is AIM WA's Head of of Product Design and Delivery. Having worked in leadership positions from front-line management to C-suite roles, Graeme has practised, trained and coached many people in the crucial skill of delegation. You can connect with Graeme on LinkedIn

This course helps to develop the skills and techniques to set the foundations for effective communication and relations between supervisor and staff, including effective delegation techniques, applying leadership principles and supporting the operational plan.