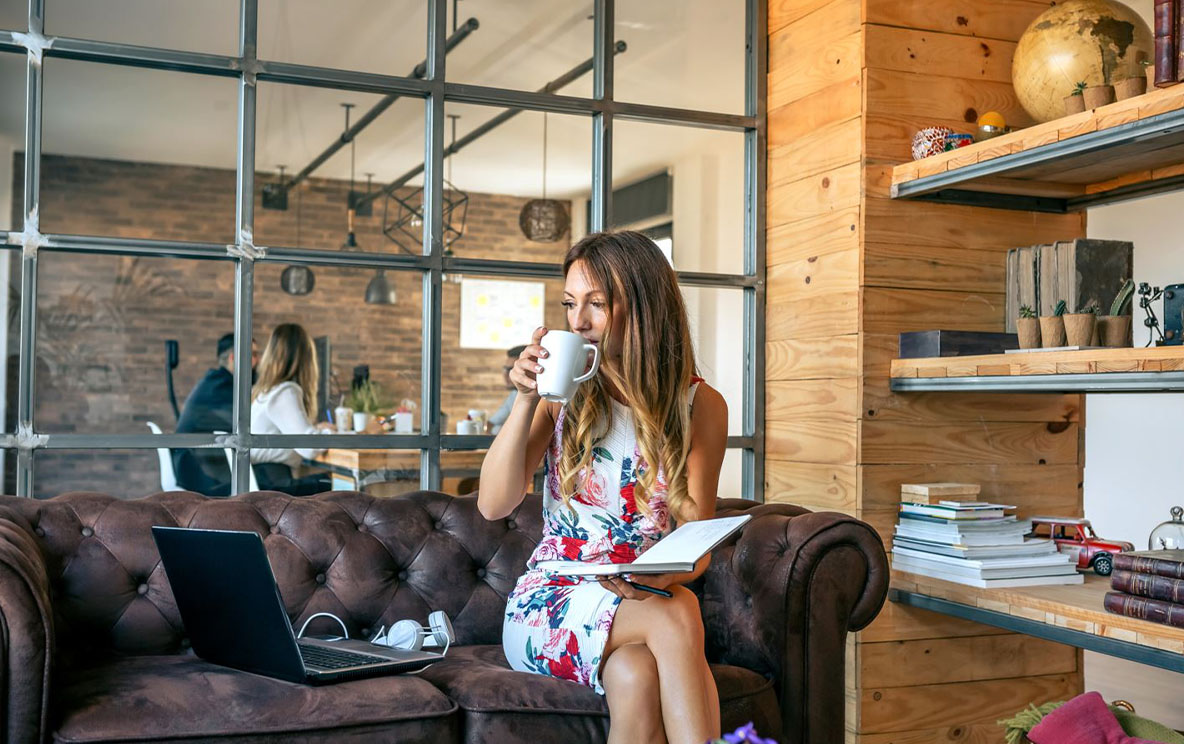 They say there is no place like home, though if bosses have their way, that “place” might soon include the office too.

In a ploy to coax workers back into the workplace, some offices are starting to take on the appearance of tastefully decorated lounge rooms complete with comfortable seating, soft ambient lighting and residentially inspired rugs.

It is a move that has many asking whether this newish trend of bringing aspects of home into the workplace is merely a passing fad or a permanent fixture in our post-pandemic lives.

Office designs of the past

To be clear, office layout and design have long been dictated by the latest fads.

The cramped cubicle of the 1990s gave way to the once acclaimed but now besmirched open-plan space.

Open-plan offices were credited by some with revolutionising the way we work and encouraging the free flow of ideas. Recently, we discovered that these set-ups also encouraged the free flow of sickness.

As we emerge from the pandemic, there is little appetite for open-plan workplaces that place us shoulder to shoulder with others.

It has led to the current trend of working in a hybrid style – where many white-collar workers split their working time between the office and a remote location, like home, to make offices a little less cramped.

While many continue to enjoy their hybrid experience, some bosses have a strong preference for having workers spending more time in the office than out. It has made them work harder to tempt employees to give up the comfort of the home office and embark on that pesky commute into the office.

Some offices are starting to take on the appearance of tastefully decorated lounge rooms.

Strangely enough, those efforts have resulted in the line between commercial and residential interiors disappearing.

The rise of the "resimercial"

Enter the “resimercial” workspace that, as the mash-up of “residential” and “commercial” suggests, brings aspects of the home into the contemporary workplace.

The idea is to use home-styled decor and furniture to give the workplace a more residential feel and create a setting that employees want – rather than have – to go to.

Within a semi-open plan workspace, there are comfortable couches, armchairs and coffee tables; flexible spaces with scattered beanbag chairs and possibly strategically placed hammocks; and accessories like rugs, lamps, framed pictures and soft lighting – all set off with a touch of greenery.

These homely elements of a resimercial office are blended tastefully with well-spaced private meeting tables, alcoves for small groups, individual work spaces and all the regular office equipment.

Some resimercial designs even include games rooms, bars, well-appointed kitchens and central townhall or “living” spaces.

Adjectives such as homely, casual, relaxed, calming, inviting, comfortable, fresh and even liberating are being used to describe resimercial workspaces.

The upshot is the resimercial concept is aimed at creating a more casual, more personalised and more inviting workspace that invites creativity and collaboration.

While resimercial workplaces pre-date the pandemic, it is only now that they are coming into their own by appealing to those who had spent lengthy pandemic stints working from home.

Why the change to home-like workplaces?

Employers remain hopeful the relaxed feel of such workplaces will not only encourage those working at home to return to the office but help employees feel safer and less stressed, and become more productive.

A resimercial office design is said to deliver the comforts of working in a home-like environment while offering the attractions of a regular office space.

The rise of the resimercial workspace has opened the door to criticism that domestic touches blur the line between work and home at a time when we should be working hard to restore the boundary that once kept the two apart.

Making the office look like home, critics claim, might do employees a disservice by compromising their sense of separation of work from the rest of their lives.

They maintain the home should remain a place for quiet contemplation and relaxation while the office should boost interaction, promote thinking and support focused problem solving.

There are also those who believe the idea of bringing the home into the office might backfire and result in too much workplace relaxation and, as a consequence, less productivity.

Detractors of the resimercial model ask how workers will be able solve challenging problems and innovate in a type of environment that they relate with relaxation and downtime – our homes.

Some will want to continue to alternate between the two.

It remains somewhat unclear as to whether home-like offices will become a permanent part of our new “workscape” or whether they will die the death of a thousand paper cuts over the next five years like so many other fads.

What is clear, though, is that it will take more than brightly coloured sofas, comfortable cushions and tastefully draped throw rugs to coax employees back into the office.